Mass Bird Deaths to be Chronicled in Upcoming Film, Midway 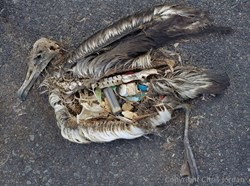 This image depicts the actual stomach contents a baby albatross in one of the world's most remote marine sanctuaries, more than 2000 miles from the nearest continent.

It is a story of how our mindless disposal of trash is leading to an extermination of wildlife thousands of miles away.

Albatrosses are "dying by the tens of thousands," says artist and filmmaker, Chris Jordan in a just released interview with Marstel-Day President and CEO Rebecca R. Rubin.

As part of Marstel-Day's ongoing series, Vital Voices of the Environment with Rebecca R. Rubin, Jordan explains how the explosive profusion of plastic trash in our oceans is killing vast numbers of Laysan Albatrosses that mistake lighters, bottle caps and other refuse for food. View the interview here:

Vital Voices of the Environment with Rebecca R. Rubin Interview with Chris Jordan

"Chris Jordan's story from Midway Atoll is one of breathtaking beauty but also tragic loss," said Rubin. "It is a story of how our mindless disposal of trash is leading to an extermination of wildlife thousands of miles away."

Set aside as a national wildlife refuge in 1988 for its extraordinary importance for nesting sea birds, the remote Midway Atoll has nevertheless become an unlikely stage for an unfolding environmental tragedy that is a product of our careless disposal of garbage. This horrific intersection of refuse and wildlife abundance inspired Chris Jordan, well-known for his photographic mosaics, to call attention to the harm our disposable culture is having on the environment, and to create the film Midway on the subject which is set to be released in 2014.

In the interview, Jordan tells Rubin about what he's witnessed on Midway, the extent and causes of the Pacific Gyre, and explains what he hopes to accomplish with his upcoming film, Midway.

Marstel-Day's Vital Voices of the Environment with Rebecca R. Rubin series spotlights critical thinkers and planners, each of whom offers unique insight on the key issues we face now and for the environmental future of our planet.

Recognized for five consecutive years as one of the Inc. 5000 fastest-growing companies in the nation, Marstel-Day is a socially-responsible, idea-driven environmental company offering green consulting to the public and private sectors.