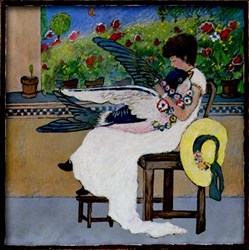 "If your heart catches in your throat ... Ask a bird how she sings"

It wasn’t deliberate that ‘Night Rainbow’ ended up being kind of ‘Zen for kids’ -- which is pretty Zen in itself.

Working with digital publishers Lucid Dream Atelier, best-selling author Cooper Edens has transformed his classic art-and-words book, "If You’re Afraid of the Dark, Remember the Night Rainbow," into an animated, interactive app for the kid-friendly iPad, a perfect holiday gift for budding readers.

First published over 25 years ago, the "Night Rainbow" book has sold more than a million copies. Fans have been drawn to its sense of humor and optimism, and its unique impressionist/fantasist illustrations.

Cooper worked with longtime friend, animator and sound designer Michael DeCourcey to stay true to the original art, while enhancing the experience of surprise and insight. The app takes full advantage of the iPad’s intuitive touch-screen controls. "I’ve seen four-year-olds who are not just turning the ‘pages’ but reading the app as a poem, and interacting with the animations over and over again," Cooper reports. "For any kid with access to an iPad, ‘Night Rainbow’ will be a natural fit."

"There’s no question that books and reading have changed, especially the last five or ten years," Coopers says. "But this new app gives me a chance to open up some of my images and words, and play with my ‘horizontal’ sense of a story: If you don’t like the view ahead, look sideways. I think that message is even more important with live pixels in front of you."

Cooper adds, "It wasn’t deliberate that ‘Night Rainbow’ ended up being kind of ‘Zen for kids’ -- which is pretty Zen in itself. Like my book, this app seems to me be something to share between young and old. It’s more than just a gift--something like a digital keepsake, something you go back to and share as life throws little curve balls at you. On an iPad."

"And," Cooper concludes, "if this digital app takes some new readers back to the print version, and they see it with a sense of recognition, and even delight, so much the better. Whether it’s print or pixels, it’s all happening in your mind."

For readers, young or old, "Copper Edens Night Rainbow" is now available as a very giftable download, to iPads, from the App Store for $5.99.

Cooper Edens is a Seattle-based author and artist. He has written and illustrated original works, like "If You’re Afraid of the Dark," "The Star Cleaners Reunion," Secret Friends" and "Caretakers of Wonder." He has also compiled a number of "Classic Illustrated Editions" of The Adventures of Alice in Wonderland, Robin Hood, and Tales from the Brothers Grimm, and others.