Jeremy Spencer, legend of British blues, announced his 2014 US tour which will include a showcase at SXSW and appearances in Los Angeles, San Francisco, Chicago, Detroit, Cleveland and New York. Jeremy has launched a Kickstarter campaign to fund the tour and his new release "Coventry Blue". 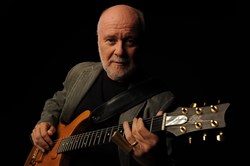 Jeremy Spencer, original member of Fleetwood Mac, will tour the US in 2014

Jeremy had planned a tour in 2012 in support of the recently released & critically acclaimed album "Bend in the Road", but the tour was unfortunately cancelled due to visa delays. Spencer’s fans in this country have long been waiting for his return. In fact, except for a few brief US appearances (in 2006 and 2010), 43 years have passed since Jeremy last toured the US (with Fleetwood Mac in 1971). With visa in hand, Jeremy announced today that he is scheduled to tour the US in February and March of 2014, initially booking venues in Los Angeles, San Francisco, Detroit, Chicago and New York.

Jeremy has launched a Kickstarter Campaign offering advance premiums that will extend his tour to other cities in the US and fund the new CD. Kickstarter supporters will be eligible to receive pre-release downloads of "Coventry Blue", autographed CDs or LPs, original artwork or private concerts. There will also be an exclusive 2014 Tour Club that will provide exclusive video and audio live updates from the tour.

Jeremy Spencer is renowned as a consummate slide guitar player with the years only enhancing his subtlety and taste. He still is the foremost Elmore James stylist alive - bar none. Jeremy can and does tear it up, retaining his verve, passion and devotion to the blues, but now he brings a cultivated maturity, assured conviction and compositional purpose that are truly sublime. His songs come via his intimate journey from the spiritual core of his heart and connect profoundly with listeners. The original Fleetwood Mac were Britain's most authentic blues band during the sixties boom before morphing into mega-million selling pop celebrity. Their beloved alliance remains an historic testament to the era's meeting of generations, melding of continents and shared musical devotion.

This tour will afford Jeremy the opportunity to display his many facets with a wider evolved guitar pallet as displayed on Bend and Coventry Blue. At last he will deliver live on these recordings with their haunting melodies and exquisite guitar harmonies as well as select mighty Mac blues and rock n' roll in his inimitable style. Expect his alternatively dirty and precise Elmore James slide stings; he'll delve deep into blues nuggets that he discerningly curates and revitalize the primordial rock that he spot on mimicked famously and comically on stage with the Mac. Further treat is his expansive range of influences from Django Reinhardt to Marty Robbins to Mark Knopfler, fingering them effortlessly and seamlessly incorporating them into his own compositions as natural an easy fit as that of his beloved ceramic slides. Jeremy's tour return to these shores at a creative pinnacle makes this a rare opportunity for fans.

"Bend in the Road" has garnered rave reviews:

"Making a full-blown return now, the veteran released his fifth solo album, "Bend in the Road", that shows the master hasn't lost a bit of his youthfulness. Spencer is in his element on this collection of newer cuts and classics such as Otis Rush's punchy, mesmeric "Homework" and Homesick James' "Homesick". They all feature that mythical slide, but Jeremy also plays a fine piano that breaks the album in the middle from classy to exceptional. But the genuine magic settles in after an ivories-lighted, deep "Merciful Sea", marries widescreen anger to a pacifying sway in an alchemic manner which can move mountains and souls. And then there's peaceful title song to elegantly sign it all off - and leave Jeremy's fans wanting more. The road goes on, so may Spencer's time be long." -- Dmitry M. Epstein, "Let it Rock"

"Bend in the Road" finds Jeremy Spencer doing what he does best, delivering quality blues. It's a great album filled with many exceptional cuts, once again assuring that Spencer will forever be remembered as one of the greats. And what's best? He is far from done. Be ready for some more music to surface in time to come." -- Mark Kadzielawa, "69 Faces of Rock"

"In following up "Precious Little," his notable 2006 comeback, Jeremy Spencer has crafted his fifth and finest solo release. Maybe "Precious Little" was Spencer’s way of getting his studio legs back after a nearly three-decade absence from recording. Or perhaps choosing to make "Bend in the Road" a collaboration gave it that extra oomph. Then again, it could simply be — as he told The Oakland (Mich.) Press in January 2010 — that "I’ve got so much material ’cause I’ve just been, like, dormant. I just turned 61, so you do kind of want to get it out while you can and show people what you’ve got." Whatever the reason, "Bend" is a startling achievement for the founding Fleetwood Mac slide guitarist." – Peter Hund, "Good New Music"