Greathouse Books Released: Doc, I Want My Brain Back - My HBOT Miracle and Offers 22% to Help Stop the 22 Veteran Suicides Occurring Every Day

Dan has pledged 22% of all book sales to help finance this successful treatment method for Veteran suffering with Post Traumatic Stress. Read the story of family love, perseverance, and how Hyperbaric Oxygen therapy gave Dan his life back, and help stop the 22 veteran suicides occurring every day. 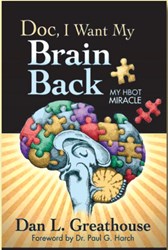 Doc, I Want My Brain Back My HBOT Miracle

'Doc, I Want My Brain Back' chronicles the events of Dan Greathouse’s life the led Dr. Paul Harch to discover the tip of the iceberg for neuro-rehabilitation.

Greathouse Books--At last, the long-awaited (22 years) chronicle of Dan Greathouse’s amazing story of neurorehabilitation has been published. Packed into 118 short pages is a story of the dramatic deterioration of a successful man's life to the nadir of a jail cell and wrongful psychiatric commitment and then back to the triumphant resurrected heights of personal, professional, and life accomplishments, culminating in the publication of his book. It is a book and story that can only be described in superlatives as Dan recounts the extremes of life experiences he traversed in a matter of 4 short months. It’s implications for neurorehabilitation are profound and far-reaching and mark the birth of modern neurorehabilitation with hyperbaric oxygen therapy.

Dan Greathouse was a successful junior high school math and English teacher, principal of the night GED school, accomplished musician who played in nightclubs as an avocation, and a deeply spiritual individual. As an active adventurous thirty-three year old man Dan was lured to SCUBA diving and suffered an air embolism and brain decompression sickness. Afflicted with abnormalities of gait, balance, cognition, and emotion, he was no longer able to teach, speak properly, play his musical instruments, operate a simple computer keyboard, or even walk in a straight line.

Misdiagnosed by dozens of physicians and psychologists, despite an abnormal EEG and IQ and cognitive testing that showed he was functioning in the average to severely impaired range, this valedictorian of his college class was told his difficulties were all due to sudden psychiatric and emotional deterioration of unknown cause. Suicidal over his severely injured brain, he was committed to a psychiatric hospital, taken to jail and accused of murder, and finally judicially committed.

In the depths of despair Dan’s premature release from the psychiatric commitment was secured and he was brought to New Orleans to receive a lower dose hyperbaric oxygen therapy protocol developed by Drs. Harch, Gottlieb, and Van Meter that was based on work done by Dr. Richard Neubauer.

The story of Dan’s recovery while in New Orleans from untreatable chronic neurological injury is meticulously recounted by Dan from the eyes and mind of a person without hope. Follow him through this riveting story of inner emotion and despair where the only acceptable solution appeared to be suicide. Dan’s experience is the seminal event that marks the birth of neurorehabilitation with hyperbaric oxygen therapy in the United States. His story illuminates the fate of so many people in society whose lives take a fateful turn to the worse, instantaneously, after a brain injury of any cause. Poorly characterized, misdiagnosed, and finally ostracized by all but family members brain-injured individuals begin a solitary course of despair and dysfunction understood by no one other than those who experience the same.

This autobiographical account by Dan L. Greathouse chronicles his successful treatment twenty-two years ago and the medical case that launched one of the greatest advances in modern medicine. Unlike other brain rehabilitation accounts, “Doc, I Want My Brain Back” tells the story of how hyperbaric oxygen therapy (HBOT) has the power to repair a brain injury. In Dan’s case HBOT was able to restore life from hopeless circumstances. He explains the scientific concept of applied 100% oxygen under pressure actually repairing the brain.

Following a scuba diving accident, Dan suffered from brain decompression sickness. Dan’s father, Jack Greathouse, researched treatments for decompression illness. He found supporting evidence for HBOT that Dr. Harch had successfully applied to other divers. The day that Betty, Dan’s mother, checked him out of the mental hospital, he was plotting his suicide; however, Jack and Betty had already arranged for Dr. Harch to treat Dan. The treatments were successful, and some of the data, including Dan’s SPECT brain images, are included in The Oxygen Revolution by Dr. Paul G. Harch and Virginia McCullough.

Twenty-two years later, Dan lives a life, free from suicidal ideation, and free from psychotropic medications. He returned to teaching, and completed a master’s degree in educational diagnosis, as well as a certificate from The George Washington University in the study of acquired brain injury.

It’s been determined that 22 U.S. Veterans are lost each day to suicide. Greathouse Books would like to do something to help stop these tragic deaths. HBOT has the power to repair the injured brain and completely restore a life from seemingly hopeless circumstances. Dan is so grateful for having his life completely restored that he is donating 22% of the book and e-book proceeds to the Greater New Orleans Foundation (GNOF.org) presenting the Harch Hyperbaric Research Fund in order to provide HBOT to our veterans who suffer from traumatic brain injury (TBI) and post-traumatic stress (PTS). Every purchase of this book or e-book will contribute to saving lives.