Treasure Hunt in the Footsteps of the Pirates of Mazatlan 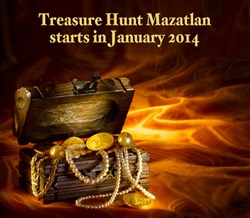 There are three different formats of the Treasure Hunt:

The real Treasure Hunt
Mazatlan has an impressive history. In the 16th century it was a major port for Spanish galleons. Gold and silver from the nearby Sierra Madre Mountains were loaded onto ships. This attracted some of the notorious pirates, including Sir Francis Drake. The pirates used this natural harbor as hiding place from which they attacked the treasure-laden galleons that sailed Mexico’s western coast. They buried parts of their loot on the islands of Mazatlan.

Travel Secret Mexico will start a treasure hunt on Deer Island in January 2014. Adventure Travelers from all over the world are invited to join an expert team for the ongoing expeditions. Metal detectors, keyhole cameras and 3D mapping will be used for the search. This extensive archaeological, geological and ecological research involves three scientists with a background in marine biology, oceanography and cartography. The treasure hunters are not going to dig holes or do anything destructive to the environment, because Deer Island is a UNESCO World Heritage Site.

The organized Treasure Hunt
This format is for children and their mothers who cannot physically work on the search sites on the islands. Their Treasure Hunt starts with a series of cryptic clues and involves travel across the city and region. They will discover the breath-taking landscapes, unspoiled coastline, rich culture and long history of this beautiful country, experience its safety and serenity and enjoy the warm hospitality of the people of Mazatlan.

The virtual Treasure Hunt
People worldwide can follow the real Treasure Hunt and provide input for the action teams. This interactive format combined with the TV shows provides participants with an exciting new experience. We call this format Edutrainment – The fusion of Education, Training and Entertainment.