CBS ReAirs The Most Popular Version of "Santa Baby" For Over a Decade; Hint: It was Never Marilyn Monroe

CBS aired Cynthia Basinet's "sultry, seductive" version of "Santa Baby" for the second year in a row in their NCIS LA. Her vocal styling has had reviewers comparing the latest "Santa Baby" offerings to this rendition for over a decade, unbeknownst to fans believing it to be Marilyn. 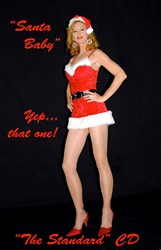 "Well, did kinda want the whole world singing in perfect harmony, like the Coke commercial." said the model turned actress, singer in an interview with NCIS LA Magazine last year.

CBS aired Cynthia Basinet's version of "Santa Baby" for the second year in a row in their NCIS LA Holiday episode starring LL Cool J, preceding the Grammy Nomination Concert, last Friday. "One of the most sultry and seductive voices around" declared ArtistDirect.com when Cynthia launched on-line in '99. Cynthia's "Santa Baby" was first recorded in '97 as a personal gift to the actor, Jack Nicholson. Her vocal stylings has had reviewers comparing the latest "Santa Baby" offerings to this rendition for over a decade.

This years', from BET's and Atlantic Records Tamar Braxton to Disney's Debby Ryan and Ariana Grande feat. Liz Gilles to Bad Boy's Megan Nicole putting their spin on the now iconic version. Originally, miscredited to Marilyn Monroe due to illegal file sharing it has become the Christmas staple most have been listening and singing to, unbeknownst.

The model turned actress, singer who resides in NYC and LA has put out her new video for "Santa Baby" on YouTube and VEVO with a tribute to her idol, Eartha Kitt; the original song's siren, on the 60th anniversary.

The critically acclaimed artist who has long appreciated and jokes it off as a complement, "Well, did kinda want the whole world singing in perfect harmony, like the Coke commercial." in an interview with NCIS LA Magazine last year.

"Santa Baby" as well, as her other Holiday treat, "The Christmas Song, Chestnuts Roasting On An Open Fire", arranged and performed on piano by the great, Emmy Award winning Lee Musiker can be found on "The Standard" available on iTunes and Amazon.

Cynthia, a single mom has gone on to visit refugees in the Western Sahara, nominated for a shared Nobel Peace Prize, addressing the UN, soundtracks, book mentions and more acting.

More on Cynthia can be found by visiting her at:
http://www.cynthiabasinet.com

Photo courtesy of: Patricia RosemanBasinet Croons For The State Of The Sahrawis