Boston moving company to load, transport, store, and deliver thousands of dollars worth of toys bought by Bruins players for multiple children's hospitals. 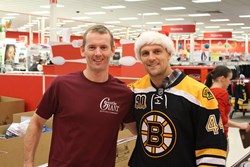 We feel like Santa when we pull up to the hospitals in our toy-filled purple Gentle Giant trucks!

This holiday season, Gentle Giant Moving Company will again join the entire Boston Bruins roster for the Boston Bruins annual Holiday Toy Shopping. The first part of this year’s event took place at the Target in Everett, MA on Tuesday, December 3rd in which Bruin’s players purchased toys from wish lists of children spending the holidays in local hospitals.

The toys purchased at the Holiday Toy Shopping event will be delivered by Gentle Giant Moving Company and Bruins players to hospitals and charities around Boston and given as gifts to over 600 children who are unable to celebrate the holidays at home. Bruins Hall of Famer Ray Bourque started the holiday toy shopping and delivery tradition when he was captain, and the event has continued through the years. Bruins Alternate Captain Patrice Bergeron will spearhead the Bruins Toy Shopping and Delivery for the fourth year. This is the third year in which Gentle Giant has provided transportation, storage, and delivery of the gifts.

“Gentle Giant is so proud to be working with the Boston Bruins again on this wonderful Holiday Toy Drive,” explains Gentle Giant Founder & CEO Larry O’Toole. “We feel like Santa when we pull up to the hospitals in our toy-filled purple Gentle Giant trucks!”

The toy delivery will take place on Friday, December 20th around Boston.