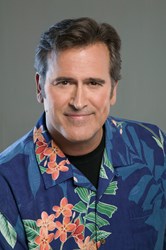 Adding the cult film actor behind Evil Dead’s Ash Williams and Burn Notice’s Sam Axe is a fantastic addition to the 2014 Denver Comic Con line-up, and a perfect example of how we’re delivering top-notch guests to our fans.

DCC will be held at the Colorado Convention Center on June 13 – 15, 2014; tickets are on sale now at DenverComicCon.com.

DCC promotes the arts and literacy at the con through its more than 300 hours of programming and the CBC Kids Corral, an 8,000 sq. ft. area providing educational, youth-based programming and fun activities for our younger attendees and their families. Additionally, the Con is also the major funding program of CBC, which applies its curricula in the community through schools and community organizations such as the Denver Public Library.

Each of these guests will be at the convention to sign autographs, interact with fans and take pictures with attendees. The growing roster of announced guests can be found at the con website. Other recently signed guests include:

Bruce Campbell – Campbell is known for his film roles as Ash Williams in the Evil Dead, Bubba Ho-tep, and My Name Is Bruce (in which he starred and directed), as well as his voice work in Cloudy with a Chance of Meatballs and Cars 2. His television work includes The Adventures of Brisco County, Jr., Hercules: The Legendary Journeys, Xena: Warrior Princess, and as Sam Axe in the USA Network series Burn Notice.

Steve Lieber – Lieber has worked on many popular comic characters such as Batman, Superman, Hellboy and illustrated Max Allen Collins’ On the Road to Perdition, which was adapted into the 2002 Academy Award-nominated film. But he's best known as the artist of the graphic novel Whiteout and its Eisner-winning sequel, Whiteout: Melt. Both were subsequently adapted by Warner Brothers as a movie starring Kate Beckinsale. He recently completed two Alabaster graphic novels at Dark Horse, and is currently illustrating Superior Foes of Spider-Man for Marvel Comics.

Jim Cummings – An Emmy- and Annie-nominated voice actor, Cummings is the voice behind many of the most popular cartoon characters including Winnie the Pooh, Tigger, the Tazmanian Devil, Darkwing Duck, Cat from CatDog and others.

For more information about Comic Book Classroom or Denver Comic Con and to purchase tickets, visit http://www.ComicBookClassroom.org or http://www.DenverComicCon.com.

Entering its third year, the DCC is Denver’s premiere fan experience, covering the worlds of comic books, film, and related media. It is also an extension of and an awareness builder for its parent organization, Comic Book Classroom. For the latest news and information, visit http://www.denvercomiccon.com

Comic Book Classroom is a charitable organization that educates through alternative approaches to literacy, learning, and character development. CBC creates programs for underserved students, schools, and communities via comic books, graphic novels, and related media. CBC is the organizer and producer for the DCC. http://www.comicbookclassroom.org.

Steve Lieber's artwork on the cover of Marvel's "Superior Foes" #5