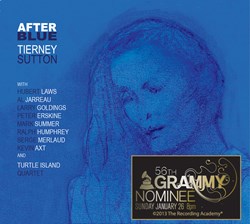 Joni's musical poetry is all about light and love and loss...Tierney 'gets' all of that on every level, plus has the skills, passion and life experience necessary to sing Joni convincingly and heart-felt. - Peter Erskine

Jazz vocalist Tierney Sutton has earned a Grammy nomination for her latest release, homage to revered pop singer-songwriter Joni Mitchell, "After Blue." Including her nine CDs over 20 years with Tierney Sutton Band, this projects Tierney as an acclaimed six-time Grammy-nominated artist. With After Blue, her most daring and revealing project to date, Sutton puts her own unique stamp on familiar Mitchell tunes going back to 1969’s “Both Sides Now” and 1970’s “Big Yellow Taxi” and including more recent numbers like 1979’s “The Dry Cleaner from Des Moines” and 1982’s jivey “Be Cool,” along with Joni’s haunting take on the standard “Don’t Go to Strangers” from her 2000 orchestral album, Both Sides Now. “That album with orchestral arrangements by Vince Mendoza was my doorway into ‘Joni-land,’" Sutton writes in the liner notes to After Blue. “It is the vocal album that I have listened to more than any other in the years since its release. I consider it to be on par with Sinatra’s Wee Small Hours and Billie Holiday’s Lady in Satin.”

Having come up as a Jazz singer with an intimate knowledge of the Great American Songbook, Sutton wasn’t all that familiar with Mitchell’s work prior to hearing Both Sides Now in 2000. But that tour de force recording sparked her interest and sent her on a journey of investigating Mitchell’s earlier masterworks like Blue, Ladies of the Canyon and Court and Spark. But it would be years before she started performing any of that material in concerts. “I knew that Mitchell’s music was not something I could glance at and then perform,” she writes in the liner notes. “I had to live with it---for years—like her fans who had absorbed the music in their youth. I wanted to ‘marinate’ in Joni Mitchell.” Eventually, Sutton incorporated “Big Yellow Taxi” into her sets with her working band (pianist Christian Jacob, bassists Trey Henry and Kevin Axt, drummer Ray Brinker) and by 2011 she was performing “All I Want” and “Little Green” on tour with the Turtle Island Quartet.

When the time seemed right to do her own Joni Mitchell tribute recording, Sutton’s regular pianist Jacob was immersed in his own solo project and her longtime drummer Brinker had just gotten married and was preparing for life as a first-time father. So she recruited pianist-organist Larry Goldings, whose longstanding tenure with James Taylor gave him a greater understanding of pop forms and the decidedly non-jazzy accompaniment required of a pop gig. Next she recruited friend and former Weather Report drummer Peter Erskine, who had actually played on “The Dry Cleaner from Des Moines” from Mitchell’s 1979 Mingus album. Cellist and Turtle Island Quartet founder Mark Summer came on board for a frisky duet with Sutton on “All I Want” and a stark, stirring duet rendition of “Both Sides Now,” while the full TIQ backed Tierney on intricate arrangements of “Blue” and the delicate “Little Green.” Parisian guitar master Serge Merlaud turned in a beautiful straight ahead reading of the melancholy jazz standard “Don’t Go To Strangers,” which also features Tierney Sutton Band bassist Kevin Axt chording, a la Freddie Green, on acoustic bass guitar. Merlaud also played nylon string acoustic guitar in an intimate, classically influenced duet with Sutton on “Answer Me, My Love,” which Mitchell performed on 2000’s Both Sides Now.

Elsewhere on After Blue, Goldings supplies the Hammond B-3 bass lines and bluesy-churchy organ work on “The Dry Cleaner from Des Moines” and “Be Cool,” then switches gears for wonderfully evocative piano-voice duet readings of “Court and Spark” and “Woodstock,” along with a moving medley of “April in Paris” that morphs back and forth into Joni’s “A Free Man in Paris.” “What I love about Larry is that he is all about the sound and the beauty of the simple line,” says Sutton. “And I’m sure that comes from all of his years with James Taylor. All the albums I’ve done up until now have been about these really amazing, crazy arrangements with all this stuff going on with reharmonization and all the rest of it. But I really wanted to be simple on this project. Of course, I’m a Jazz singer so there has to be some sensibility with a couple of tensions in there. And Larry is the perfect balance of those things. He’s really special and I feel lucky to have him on this session.”

Ralph Humphrey, the longtime in-demand West Coast studio drummer and one-time member of Frank Zappa and the Mothers of Invention, adds a deft touch with brushes on an inventive 5/4 drums-voice duet rendition of “Big Yellow Taxi.” Flute legend Hubert Laws appears on “The Dry Cleaner from Des Moines”” and “Be Cool,” the latter also featuring the great Al Jarreau in a soulful and scintillating vocal duet with Tierney. Says Sutton on how she came to recruit fellow Milwaukeean Jarreau for this tribute project: “I was listening to Travelogue, the other Vince Mendoza record with Joni Mitchell, and all of a sudden ‘Be Cool’ comes on. And I remember I was walking around my house, doing stuff while listening to this record, and I did like a double take in my kitchen and said to myself, ‘This sounds like an Al Jarreau tune, it doesn’t sound like a Joni Mitchell tune.’ And I decided that was it. That was the tune for him to sing on this album. I suggested it to his manager and they ran it by him and the next thing I knew, we were in the studio together. It was really propitious…a very fun, lucky thing.”

Sutton’s last musical tribute was her 2001 Bill Evans homage, Blue in Green. With After Blue, she pays tribute to an artist whom she holds in equal esteem. “Joni’s phrasing is so signature and influential, and as a lyricist and as a poet she stands alone. She has deep Jazz credentials and there is a legitimate respect that Jazz musicians and jazz lyricists have for her.

This album means many things to me,” Sutton writes in the liner notes to After Blue. “It comes after my 30 years of concentrating on the ‘Blue In Green’ tones of Miles and Bill Evans and Coltrane and Sinatra. And after spending time with the many hues of Joni’s own repertoire, I hope this record represents a coming together of those hues, those colors of music. Thank you Joni Mitchell for your inspiration, your excellence. All I can hope for here is to scratch the surface of your deep legacy…to paint a little multi-colored portrait inspired by you.”

Sutton’s hues are vivid, inviting and highly personal throughout her Joni-inspired portrait on After Blue.

For more information on all things BFM Jazz visit: http://www.bfmjazz.com.