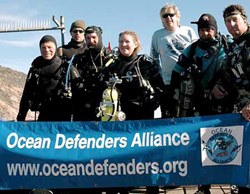 We are proud to support this organization and hope their influence leads both commercial and recreational fishermen to be more conscientious about the negative effects their actions have on the environment.

Ocean Defenders Alliance (ODA), an organization dedicated to cleaning hazardous debris such as abandoned commercial fishing netsrefuse from the oceanmarine floor, has received backing sponsorship from Animal Support. While the organization isn’t strictly an animal welfare organization, its work benefits a wide variety of marine life in many ways.

“We were shocked to discover that commercial fishing vessels leave a large amount of debrisrefuse on the ocean floor; you would think that they would recognize the importance of preserving the health of the ocean’s ecosystem,” says Julian Omidi, cofounder of Animal Support. “The life of marine organisms is threatened by the ghost gear’garbage the fishermen leave and we applaud the Ocean Defenders Alliance and its founder Kurt Lieber for the wonderful work they do. We are proud to support this organization and hope their influence leads both commercial and recreational fishermen to be more conscientious about the negative effects their actions have on the environment.”

In 2002, Kurt Lieber, a recreational diver and ocean floor photographer, founded the Ocean Defenders Alliance after he noticed a large amount of abandoned fishing gear and refuse on the ocean floor during his dives. The tangled gear often entrapped, drown, and starved sea animals caught within the mechanisms nets/traps, and was in some places was also poisoning the ecosystem to such an extent that it inhibited the lifecycle of the local marine life. With a 40-foot marine vessel and a crew of volunteers, he and other volunteer divers regularly gowent out and retrieved thise abandoned equipment and disposed of it on land. All of the marine life that they findound trapped in thise gear iswas gently extracted and released back into the ocean.

Ocean Defenders Alliance (http://www.oceandefenders.org) was one of the first organizations to offer conduct hands-on, ocean floor cleanup servicesoperations—and remains the only organization in the State of California with this sole mission. To date, Alliance ODA crewsteams have cleaned up many thousands of pounds of deadly marine debrisrefuse during hundreds of dive excursions, and liberated countless fish and marine mammals from the masses of discarded netting, traps, cages, lines, and other trash.

Another important aspect of the ODAAlliance’s work is to raisinge awareness about commercial fishing practices to restaurants, grocery chains, and other seafood retailers. The team also conducts seminars and presentations at schools, dive and fishing clubs, and expositions in order to educate the public about the dangers of polluting our oceans.

Animal Support (http://www.animalsupport.org) is dedicated to addressing pet over-population and abuse by promoting charities working on behalf of animal well-being. The organization was cofounded by brothers Dr. Michael Omidi and Julian Omidi along with long-time friend Maria Abaca to advocate for animal protection, rescue, adoption, and spay and neuter laws. Animal Support does not accept donations but encourages direct contributions of money and talents to the charities and organizations featured on our website. For more information about Animal Support, send a message using the website’s Contact Us function, check out Animal Support on Facebook, Twitter, Google+, and Pinterest.