2014 4K TV Shipments to Rise Dramatically in China, According to NPD DisplaySearch 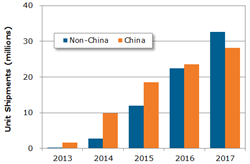 Panel makers are planning for nearly 27 million 4K TV panels to be produced next year, while brands have somewhat more modest expectations for the end market, but there is a significant difference in outlook between China and other regions.

Interest in 4K TVs is at a fever pitch now that a critical moment is approaching in the market, as it transitions from early adopters to more mainstream consumers. Rapidly falling prices, particularly in China, will fuel adoption.

“As the manufacturers of 4K TV LCD panels and sets expect strong growth in 2014, the supply chain focus on growing demand is rising dramatically,” noted Paul Gagnon, director for global TV research at NPD DisplaySearch. “Panel makers are planning for nearly 27 million 4K TV panels to be produced next year, while brands have somewhat more modest expectations for the end market, but there is a significant difference in outlook between China and other regions."

According to the latest NPD DisplaySearch Quarterly Global TV Shipment and Forecast Report - Advanced, 4K TV shipments are expected to total 1.9 million units in 2013, rising to 12.7 million units in 2014. China will account for 87 percent of 4K TV units in 2013, dropping only slightly to 78 percent of units in 2014. This means that 4K TV shipments within China will lead all other regions combined by a factor of three in 2014. Eventually other regions will slowly catch up, but China will remain the leading region for 4K TV shipments throughout the forecast, enabled by intense competition and very low price points. 4K TV average prices are expected to fall below $1,000 in China during 2014, while the worldwide average remains over $1,100 and close to $2,000 in North America.

Overall TV demand is expected to fall 3 percent in 2013, after a 6 percent decline in 2012. Overall demand in many regions is being impacted by accelerated demand in 2010 and 2011, due to a variety of factors, which effectively pulled in demand from future years. Total TV shipments should grow about 1 percent in 2014 to 229 million units, with LCD TV shipments rising to 220 million, or 96 percent of overall units. Plasma and CRT-TV shipments are declining rapidly, ending by 2016. “OLED TV technology is not expected to yield significant growth for two to three more years,” Gagnon said. “4K has therefore become a technology focal point in the interim.”

The NPD DisplaySearch Q4’13 Quarterly Global TV Shipment and Forecast Report - Advanced, available now, includes panel and TV shipments by region and by size for nearly 60 brands, and also includes rolling 16-quarter forecasts, TV cost/price forecasts, and design wins. This report is delivered in PowerPoint and includes Excel based data and tables. For more information about the report, please contact Charles Camaroto at 1.888.436.7673 or 1.516.625.2452, e-mail contact(at)displaysearch(dot)com or contact your regional NPD DisplaySearch office in China, Japan, Korea or Taiwan for more information.

NPD DisplaySearch, part of The NPD Group, provides global market research and consulting specializing in the display supply chain, including trend information, forecasts and analyses developed by a global team of experienced analysts with extensive industry knowledge. NPD DisplaySearch supply chain expertise complements sell-through information from The NPD Group, thereby providing a true end-to-end view of the display supply chain from materials and components to shipments of electronic devices with displays to sales of major consumer and commercial channels. For more information, visit us at http://www.displaysearch.com. Read our blog at http://www.displaysearchblog.com and follow us on Twitter at @DisplaySearch.