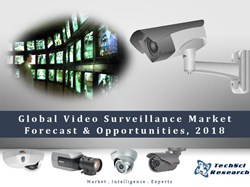 Governments across the globe are focusing more towards security, and consequently expanding their budgets to install video surveillance equipment and systems. Over the years, growing terrorist threats and attacks have pushed the need for more advanced and secure video surveillance cameras, in particular, for defence end users, majorly in North America, Middle East and Asia.

The report highlights that emergence of DIY (Do-It-Yourself) market has played a significant role in video surveillance components market, with analog-based cameras and DVRs accounting for a major chunk of the overall demand in 2012. However, with the advent of IP/Network-based surveillance components, the price sensitivity in the market would only increase and a gradual shift in demand towards IP-based systems is expected over the next five years. High definition megapixel cameras, CCD Sensors, VSaaS (Video Surveillance as a Service), and wireless video surveillance for cellular communication are the evolving trends in the global video surveillance market.

“Hikvision is the market leader, which has been awarded with many projects worldwide such as installation of Megapixel IP high speed dome cameras across the cities of Brazil and Argentina. However, other leading companies such as Axis Communications, Dahua Technology, Bosch Security and ADT are also expected to increase their presence during the next five years,” said Mr. Karan Chechi, Research Director with TechSci Research, a research-based global management consulting firm.