"Sean Tucker is an inspiration to me and to thousands of other pilots," said Ben Marcus, Co-Founder of jetAVIVA and member of the Endeavor Awards Gala Host Committee. "I am delighted to welcome Sean to our inaugural Endeavor Awards event." 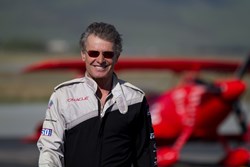 I like to think that I bring the fans' dreams of flying into the plane with me.  There's nowhere I'd rather be than in the cockpit.

Tucker joins another legendary aviator Clay Lacy; Endeavour Astronaut Scott Parazynski and his fellow astronauts; and, Hollywood luminaries, Robert Zemeckis and Ed Asner as they honor the true heroes of flying, the individuals and organizations who have demonstrated their commitment to Public Benefit Aviation.

To his millions of air show fans, Sean Tucker is a larger than life character.  When asked about his performances, Sean responds, "I like to think that I bring the fans' dreams of flying into the plane with me. There's nowhere I'd rather be than in the cockpit.”  People who have witnessed Tucker’s aerobatic exploits talk about feeling a rekindled enthusiasm for their own passions in life.

"Sean Tucker is a inspiration to me and to thousands of other pilots," said Ben Marcus, Co-Founder of jetAVIVA and member of the Endeavor Awards Gala Host Committee.  "I am delighted to welcome Sean to our inaugural Endeavor Awards event. As a young pilot I saw him perform on my first trip to Oshkosh. Later, I attended Sean's aerobatic training courses, and Sean became a mentor, not only for his masterful flying but also for his teachings on the psychology of flying."

Marcus said that proceeds of the May 4, 2014 event at the Samuel Oschin Space Shuttle Endeavour Pavilion in the California Science Center, will benefit Angel Flight West (AFW), whose corps of volunteer pilots gives the gift of flight to thousands of children and adults who require treatment at faraway medical centers.

Sean Tucker's life is marked by a search for excellence and perfected skill. He is not satisfied unless he is learning, refining a skill, or conquering a fear. Whether he is climbing Mt. Kilimanjaro, heli-skiing, cave SCUBA diving, golfing, or flying his one-of-a kind aerobatic dream machine, Sean D. Tucker is full-throttle and extremely accomplished.

He has been flying air shows worldwide since the mid-70's and has won numerous aerobatic competitions. In that time, Sean has logged more than 24,000 hours, flown more than 1200 performances at more than 500 air shows, in front of more than 122 million fans. The level of professionalism and excitement in Sean's air show displays is no coincidence. Sean practices his air show routine three times every day. To endure the extreme physical demands of each routine, Sean maintains a rigorous physical training schedule by working-out over 340 days per year.

Sean has been named as one of the Living Legends in Aviation, National Aviation Hall of Fame inductee, recipient of the Crystal Eagle Award, the General Charles E. Yeager International Aeronautical Achievement Award, inductee at the 2001 USAF Gathering of Eagles, and was recently selected as Chairman of the Young Eagles, inspiring the new pilots of tomorrow.

About The Endeavor Awards:

The Endeavor Awards (http://www.endeavorawards.org) is an annual event honoring the pilots, individuals and support organizations, corporations and government agencies most responsible for providing Public Benefit Aviation. The inaugural Endeavor Awards event will be held on May 4, 2014 at the Samuel Oschin Space Shuttle Endeavour Pavilion in the California Science Center.

Using their own time and general aviation aircraft, pilot volunteers from the many Public Benefit Aviation organizations help hundreds of people each month, providing health, compassion, and community service.

Angel Flight West (AFW) (http://www.angelflightwest.org) is a 30-year-old organization of volunteer private pilots offering the gift of flight to thousands of stricken children and adults. Along with its commercial airline partners, AFW provides non-emergency air transportation without cost to qualified passengers. Missions flown by AFW include private pilots volunteering their time and donating all expenses to provide access to treatment at faraway medical centers; transporting blood to critically ill patients; flying special needs kids to summer camps; and many more humanitarian missions.

Published on Sep 30, 2013 by All Things Aero.
A behind the scenes look at Sean D. Tucker. A film by Director Brandon Hess and Producer Tara Tucker, filmed at EAA AirVenture Oshkosh 2013.