Newly emerging flu viruses could soon be countered by a treatment that Draper Laboratory is developing that “traps” viruses before they can infect host cells. Further into the future, patients suffering from any type of virus could be cured with DRACO, a drug also under development at Draper that is designed to rapidly recognize and eliminate cells infected by virtually any virus. 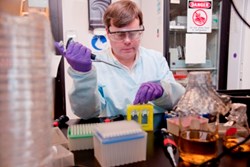 Both methods could help safeguard against bioterrorist attacks and naturally occurring pandemics in a manner that is unlikely to lead to treatment-resistant strains.

Newly emerging flu viruses could soon be countered by a treatment that Draper Laboratory is developing that “traps” viruses before they can infect host cells.

Further into the future, patients suffering from any type of virus could be cured with DRACO, a drug also under development at Draper that is designed to rapidly recognize and eliminate cells infected by virtually any virus.

Both methods could help safeguard against bioterrorist attacks and naturally occurring pandemics in a manner that is unlikely to lead to treatment-resistant strains. Initial testing on the treatments, which each use tiny, non-toxic particles that can be injected, inhaled, or eaten, has shown them to be effective and safe against a multitude of strains of disease.

Nanotraps, which could be taken at the first sign of infection or exposure, is likely the first of the products ready for use, and is expected to begin clinical trials in two to five years, according to Jim Comolli, who leads the research on the effort at Draper.

Nanotraps, developed by a team of researchers from Draper, MIT, the University of Massachusetts Medical School, and the University of Santa Barbara, are nanoparticles that act as viral “traps” using specific molecules found naturally within the human body. A paper published in the March issue of Journal of Biological Chemistry detailed their findings.

The nanotraps look like the surface of a cell, with numerous carbohydrate molecules attached that closely resemble those targeted by flu viruses in the human respiratory system. These molecules, initially characterized in the Sasisekharan Lab at MIT, act as bait for the flu virus, which bind to the nanotrap instead of a host cell and are cleared away with mucus, preventing infection, Comolli said.

The research team has demonstrated in the laboratory that the nanotraps effectively countered multiple influenza strains able to infect humans and went on to show nanotraps protected mice infected with the flu. They have also developed additional particles geared toward other types of respiratory viruses.

Nanotraps, unlike most vaccines, are not strain specific and are designed to be effective against newly emerging strains of human-adapted influenza virus. Since nanotraps mimic a fundamental step in the viral life cycle – the binding of the virus to a host cell’s receptor – nanotraps may offer an opportunity to treat devastating infectious diseases without causing the development of treatment resistance, Comolli said.

The nanotrap molecule is composed mainly of compounds found naturally in the human body so it is likely to be safe as an inhalant, topical solution, or intravenous treatment and inexpensive to manufacture. With further development, nanotraps have the potential to treat a large range of infectious diseases because the attached carbohydrates can be tuned for other viruses such as HIV, Respiratory Syncytial Virus (RSV), and Herpes Simplex Virus (HSV), as well as bacteria and toxins.

The work was originally funded by the Defense Advanced Research Projects Agency (DARPA) to address emerging pandemics or bioweapons targeting US troops; Draper is continuing the research with the intent of applying it more broadly to the civilian community.

While nanotraps could be customized to treat a variety of viruses, another project underway at Draper, DRACO could do so with a single approach. DRACO is a unique therapeutic drug that should be effective against a very broad spectrum of viruses, just as existing antibiotics are effective against a broad range of bacterial infections. DRACO could be ready for human clinical trials in five to 10 years, according to Todd Rider, who leads the research at Draper.

DRACO (Double-stranded RNA Activated Caspase Oligomerizer) is designed to detect cells that have been virally infected and then eradicate only the infected cells, rapidly ending the infection. DRACO has proven effective in vivo against influenza and three hemorrhagic fever viruses, and in vitro against 15 different viruses – including common cold viruses, the H1N1 influenza strain, adenoviruses, a mouse polio virus, dengue fever, and stomach viruses, among others. It has also been tested and proven safe in both mice and 11 different human and animal cell types representing organs like the heart, lungs, liver, and kidney, among others.

DRACO is designed to be attracted to a specific type of RNA exclusive to viral infections – long double-stranded RNA, or dsRNA. Detecting this dsRNA in a human or animal cell indicates that that host cell has been taken over by a virus and is now in the process of creating more viruses. DRACO enters cells and attaches itself to any dsRNA. Once two or more DRACOs attach to the dsRNA, they interact with one another and activate a natural self-destruct switch inside the infected cell, terminating the infected cell and the virus that it was helping to reproduce.

DRACO is designed to be both broad-spectrum and nontoxic to humans – overcoming existing issues with current anti-viral treatments. Because DRACO is so broad-spectrum and acts so rapidly, there is little opportunity for the virus to evolve defenses against this treatment, Rider said.

Rider is expanding his DRACO research and testing more strains of various viruses in cells and animals.

DRACO has been funded by grant AI057159 from the National Institute of Allergy and Infectious Diseases and the New England Regional Center of Excellence for Biodefense and Emerging Infectious Diseases, with other funding coming from DARPA, the Defense Threat Reduction Agency, and the office of the Director of Defense Research and Engineering.