According to Hubble’s law, the frequency of light from distant galaxies is shifted toward the red in a way proportional to their distance D, z = HD, where H is Hubble's constant. Dr. J. V. Kadeisvili of the Institute for Basic Research and of the R. M. Santilli Foundation announces that Dr. R. M. Santilli's invariant derivation of Hubble's law without expansion of the universe has been confirmed at five recent scientific meetings (for links to the meetings visit http://www.santilli-foundation.org/Conf-2013-No-Univ-Exp.php). 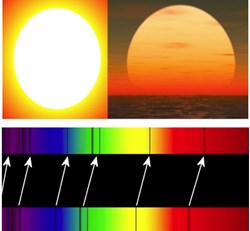 Equivalence of the redshift of the Sun at Sunset and the cosmological redshift.

Dr. J. V. Kadeisvili of the Institute for Basic Research and of the R. M. Santilli Foundation announces that Dr. R. M. Santilli's invariant derivation of Hubble's law without expansion of the universe has been confirmed at five recent scientific meetings. Hubble’s law establishes that the frequency of light from distant galaxies is shifted toward the red in a way proportional to their distance D, z = HD, where H is Hubble's constant. Doppler's law establishes a frequency shift caused by speed v away from us, z ≈ v/c, where c is the speed of light, which shift suggested the interpretation of Hubble’s law via the expansion of the universe, z = HD ≈ v/c. Santilli’s has derived Hubble’s law z = HD via a new symmetry and has confirmed experimentally the redshift without relative motion due to the loss of energy by light to intergalactic media as first suggested in 1929 by F. Zwicky (for links to the meetings visit http://www.santilli-foundation.org/Conf-2013-No-Univ-Exp.php).

"Einstein's special relativity is formulated via Lie's theory with brackets [A, B] = AB - BA; Lie's theory permits the construction of the Lorentz symmetry leaving invariant spacetime with metric m = Diag. (1, 1, 1, -1); the Lorentz symmetry predicts the Einstein/Doppler frequency shift due to speeds z ≈ ± v/c, with decrease (increase) of frequencies for speeds +v away from (-v toward) us; the physicists of the Manhattan Project promoted in the 1940's the academic acceptance of the expansion of the universe via the Einstein/Doppler representation of Hubble's law z = HD ≈ v/c," Dr. Kadeisvili stated. "However, Hubble died without accepting such a conjecture because it implies the acceleration of trillions of galaxies with the increase of the distance in all possible 'radial' directions from Earth. To prevent a return to the Middle Ages with Earth at the center of the Universe. F. Zwicky suggested in 1929 that Hubble's redshift is due to light losing energy to intergalactic gases without any expansion of the universe, but he was discredited by Einstein's followers since Zwicky's hypothesis implies the inapplicability of Einstein's theories in the large scale structure of the universe (http://en.wikipedia.org/wiki/Tired_Light)."

"R. M. Santilli has honored Hubble's and Zwicky's view beginning with studies at the Department of Mathematics of Harvard Universe in the early 1980s under D.O.E. support." Dr. Kadeisvili adds. "Santilli first achieved an isotopic (axiom-preserving) generalization of Lie's theory with brackets [A, B]* = ATB - BTA where T is a positive-definite matrix (R. M. S., "Foundations of Theoretical Mechanics," Vol. II, Springer, 1982). Santilli then achieved in 1983 the Lorentz-Santilli isosymmetry for propagation of light within physical media with metric m* = Tm leaving invariant the speeds of light C = c/n, where n is the index of refraction (R.M.S.,Lett. Nuovo Cimento Vol. 37, p.545, 1983); Santilli then showed that his isosymmetry characterized, uniquely and invariantly, the generalized law within physical media z ≈ ± (v/c)F(t, r, v, ...) where F is a function of the medium characteristics; the expansion of this law as in the distance D yields the Doppler-Santilli isoshift law z ≈ ± v/c ± HD where the second term characterizes a redshift (blueshift) of light due to loss of energy to a cold medium (acquisition of energy from a hot medium) without any relative motion, called IsoRedShift (IsoBlueShift) (R.M.S., "Isotopic Lifting of Galileo and Einstein relativities for Interior dynamical Systems," Intern. Acad. Press., 191); in 2010, Santilli confirmed experimentally the existence of IsoShifts for laser light and in 2011 established that the redness of the Sun at the horizon is entirely due to the IsoRedShift since the Doppler's contribution is extremely small (R.M.S., Open Astronomy Journal Vol.3, p. 124, 2010); consequently, Santilli has achieved a unique, invariant and verified characterization of Hubble's law from a primitive isosymmetry without universe expansion; note also the universal symmetry of Riemannian line elements (R.M.S., J. Moscow Phys. Soc. Vol. 3, p. 255, 1993); and the geometric invariant (rather then covariant)unification of general and special relativity (R.M.S., Int. J. Modern Phys. Vol.D7, p.351, 1998). (http://www.santilli-foundation.org/Confirm-No-Exp.php).

“Santilli has received numerous honors, including: the Gold Medal from the University of Orleans, France, in 1981; the nomination by the Estonia Academy of Sciences among the most illustrious applied mathematicians of all times; the prestigious Mediterranean Prize in 2007 that has also been granted to Hilary Clinton, Price Albert of Monaco , France President Nicolas Sarkozy, Juan Carlos King of Spain, and other famous people; the 2011 Nepal Scientific Prize; the Gran Cross of the St. Agata order in 2011, which is the highest honor granted by the Republic of San Marino; the Honorary Membership to the ICNAAM in 2011; the "ringing of the bell" at NASDAQ in 2012; hundreds of nominations for the Nobel Prize in Physics and Chemistry; an other honors (http://www.santilli-foundation.org/santilli-nobel-nominations.html).