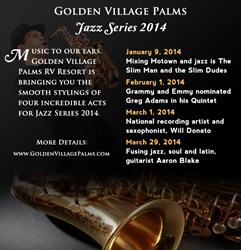 ...the 2014 Jazz Series will include notable names including The Slim Man, Greg Adams, Will Donato, and Blake Aaron.

Golden Village Palms RV Resort is thrilled to announce that the 2014 Jazz Series will include notable names including The Slim Man, Greg Adams, Will Donato, and Blake Aaron.

“We cannot wait to bring these incredible smooth jazz acts to the California desert. We know our guests and our community will truly enjoy these amazing performances,” remarked Michael Carle, General Manager of Golden Village Palms RV Resort in Hemet, California. “Whether you’re a jazz aficionado or a new listener, you've got to come out to Golden Village Palms and experience an amazing night of music.”

The Slim Man and Slim Dudes - January 9, 2014: J.D. Considine of Rolling Stone Magazine described the Slim Man style as “a near perfect example of how jazz and soul can be combined as pop.”

Greg Adams Quintet - February 1, 2014: Grammy and Emmy nominated Greg Adams will be joined on stage by Nick Milo, Dwayne “Smitty” Smith, and Herman Matthews. Their sound has been described by some as “a blend of funk jazz, R&B, and soul.”

Aaron Blake - March 29, 2014: Blake Aaron is an incredibly accomplished guitarist who has played alongside some of the greats, including Carlos Santana. The final show of the 2014 Jazz Series, don’t miss the man the Los Angeles Times called a “genius on the guitar.”

Come to one or come to all. Tickets are $15 per person and on sale now. For more information, visit http://www.GoldenVillagePalms.com. To book a stay or buy your tickets, call the front office at 1-866-477-6154.