BCC Research Forecasts the Global Market for Sugar and Other Sweeteners to Reach Nearly $97.2 Billion by 2017: BCC Research 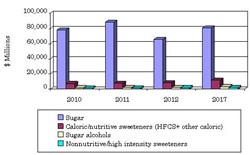 Sugar is a large commodity market and a very mature one. In the global sweeteners market, sugar claims the dominant share. In terms of consumption, the global sugar market has shown continuous increases, since sugar is a necessary product and its consumption increases with growth in population and per-capita income.

The global market for sugar and sweeteners in 2011 was nearly $99.1 billion and dropped significantly in 2012 to about $77.5 billion. In this market, sugar holds the majority share, comprising an 83% to 85% share. It is worthwhile to note that, although the volume of sugar consumption is rising globally by a compound annual growth rate (CAGR) of approximately 4%, the sugar market value in dollar terms is largely dictated by sugar prices, which are extremely volatile, leading to market-value fluctuations on a year-on-year basis.

The overall market is expected to rise at a CAGR of 4.6% and reach nearly $97.2 billion by 2017. This is based on price projections for sugar in that year as estimated by reputable economic and regulatory bodies. The sugar alcohol segment grew from nearly $1.9 billion in 2011 to $2 billion in 2012. This market is expected to grow at a five-year CAGR of 7.9% and reach a value of nearly $3 billion by 2017. The market for high-intensity sweeteners is expected to reach nearly $1.9 billion in 2017. The non-nutritive category has been growing at a faster pace at a CAGR of 5.2%. This growth is due to increased awareness and usage of dietary foods. Also, the growing population of overweight, obese, and diabetic patients globally is fueling the growth of this category.

Sugar has been the most widely used sweetener in the world, with its closest substitute being high-fructose corn syrup (HFCS). The share of other caloric sweeteners is not significant in the global sweeteners market, but their shares are expected to rise in the coming years, due to increasing cases of obesity, diabetes, and growing health concerns among the people

The sugar alcohol industry has witnessed an uptrend in the past decades. Driven by increasing demand, there is a drive for additional manufacturing capacity in major manufacturing bases of the world such as China and India. The biggest consumer market for alcohols is Europe, which uses them in various areas such as baked products, confectionaries and frozen desserts.

The food and beverage industry is increasingly replacing sugar or corn syrup with non-nutritive sweeteners in a range of products traditionally containing sugar. Aspartame is currently the most popular artificial sweetener in the U.S. food industry, as its price dropped significantly since the Monsanto Co. patent expired in 1992. Sucralose recently (since 2008) has become the most popular sweetener, quickly replacing aspartame to artificially sweeten foods and beverages.

Global Markets for Sugars and Sweeteners in Processed Foods and Beverages (FOD018D) will: