Wicked the Broadway Musical is included in a heavy promotion by Ticket Hunter Online to increase musical sales throughout the summer. Broadway ticket sales slow due to heat wave. 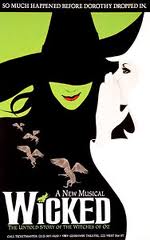 Wicked The Musical tickets are the number 2 best selling theater tickets in the country. The immensity successful Broadway musical will be playing at the San Jose Center For The Performing Arts through 2013.

Ticket Hunter Online announced a 30% discount on all Wicked tickets world tour dates with promo code "wicked". Fans can get the deal by going to http://www.tickethunteronline.com and entering in the discount code at checkout. The discount is part of an aggressive push to increase Broadway demand and extends to other popular plays such as Matilda tickets, Book Of Mormon Tickets and Kinky Boots tickets.

Ticket Hunter Online purchased in excess of 1000 tickets to the hit Broadway musical Wicked directly from San Jose Center For The Performing Arts this week.

Cheap Wicked tickets in San Jose are not easy to come by stated Tickethunteronline.com representative. "Tickets to Wicked the Musical are in high demand everywhere. In particular, San Jose, we are seeing huge demand. I purposely over purchased to be able to give the maximum reduced price which is not an easy task. We have launched a substantial discount campaign starting April 2013" stated Michael Quinones CEO of Ticket Hunter Online.

Ever since it first hit Broadway in 2003 at the Gershwin Theater in New York, audiences have been thrilled by Wicked. Many are drawn in by their love of the classic 1939 movie The Wizard of Oz and author L. Frank Baum's Oz books. Based on Gregory Maguire's 1995 novel of the same name, Wicked takes us to the years before Dorothy landed in Oz and examines the origins of its most famous--and infamous--witches.

Wicked tickets have been the number one selling event for the past 2 weeks. Wicked tickets can be purchased for as low as $15 on tickethunteronline.com/.