Three months prior to the ceremonial arrival of the Olympic flame in Russia, the Sochi 2014 Organizing Committee approved approximately half of the torchbearers for the Olympic Torch Relay, the Presenting Partners of which are companies Coca-Cola, "Ingosstrakh" and "Russian Railways". 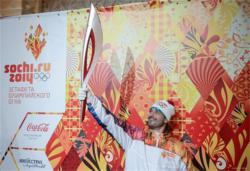 Three months prior to the ceremonial arrival of the Olympic flame in Russia, the Sochi 2014 Organizing Committee approved approximately half of the torchbearers for the Olympic Torch Relay, the Presenting Partners of which are companies Coca-Cola, "Ingosstrakh" and "Russian Railways". Of the 140,000 candidates, nearly 6,000 torchbearers have already been selected. Torchbearers representing all 83 regions of Russia were selected based on criteria from the International Olympic Committee

The campaign for the selection of Sochi 2014 Olympic Torch Relay torchbearers took place from January 15 to May 15, 2013. Three Relay Presenting Partners - Coca-Cola, "Ingosstrakh" and "Russian Railways" - as well as all 83 regions of the Russian Federation took part in the campaign. Working groups formed in the Russian regions, and by each Relay Partner, defined lists of torchbearers and submitted them to the Sochi 2014 Organizing Committee for final approval.

The torchbearer candidates were selected on the criterion of being committed to a healthy lifestyle, sports, and the Olympic values of friendship, respect and commitment to excellence.

More than 300 participants Relay are people with disabilities. The youngest torchbearer is from Kalmykia, at only 14 years old, and the oldest is from Vologda Region, already aged 93. The average age of 30% of the torchbearers is 20-30 years. The most common surnames among the torchbearers are Ivanov, Petrov and Kuznetsov, and the most common names - are Aleksandr, Sergey and Aleksey.

The selected torchbearers also include 136 representatives of foreign states: citizens of the United States, Brazil, Japan, Korea, Sweden, Ukraine, as well as nationals of Great Britain and Spain.

The Sochi 2014 Organizing Committee continues to process and approve the Olympic torchbearer application forms. The final agreed list of 14,000 people will be created by the end of September 2013.

Each candidate selected to be an official torchbearer of the Sochi 2014 Olympic Flame will receive an email to the address, which was indicated on the application form either by the candidate or the person who nominated him/her. The email will contain a celebratory message from the Organizing Committee as well as instructions on further steps to be taken.

The Olympic Torch Relay will begin its journey from Moscow on October 7, 2013. According to the organizers' calculations, 90% of the Russian population is going to find themselves within an hour's reach of the Torch Relay route at some time or other, and this means that approximately 130 million Russian citizens will be able to watch or participate directly in the Relay. Overall, the torch will travel across more than 65,000 kilometers, including by car, train, plane, Russian troika and even by deer.

The Sochi 2014 Olympic Torch Relay will be the longest in the entire history of the Winter Olympic Games. The Sochi 2014 Relay is also going to be the longest of all national Relays to have taken place exclusively within the territory of the country hosting the Games. 14,000 torchbearers will carry the Olympic torch through 2,900 towns and cities in all 83 of the country's subjects during the Olympic Torch Relay. The Relay will end at the Opening Ceremony of the Olympic Games in Sochi on February, 7, 2014.

The Presenting Partners of the Torch Relay are Coca-Cola, "Ingosstrakh" and "Russian Railways".