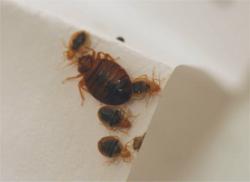 Bedbugs continue to have a significant presence across the country, in cities large and small, and pose concern for public health. There is now evidence that suggests that severe bedbug infestations may be associated with anemia.

Thought to be eradicated since World War II, in recent years, bedbugs have been making a comeback throughout the United States. Beyond their annoying bites and welts, research indicates bedbugs can pose physical and psychological health concerns as well. Additionally, reports of bedbugs are increasing in some areas of the country not previously prone to outbreaks, indicating they are on the move.

The 2013 list of cities with the highest increases in bedbug infestations include:

“Bedbugs continue to have a significant presence across the country, in cities large and small, and pose concern for public health,” said Stan Cope, PhD and entomologist with Terminix. “There is now evidence that suggests that severe bedbug infestations may be associated with anemia. Also, bedbug bites can result in secondary infections due to excessive scratching. Bedbug infestations are also known to have a psychological impact and can cause emotional stress and irritability, so if you think you have an issue with bedbugs you should immediately contact a professional to treat your home or business,” added Cope.

Terminix created the list by compiling and analyzing bedbug-specific call volume to its more than 300 branches throughout the country. The rankings represent cities with the biggest percentage gains in bedbug customer calls from Jan-May 2013 compared to the same time period in 2012. Eight of the cities – Columbus, Los Angeles, Dallas/Ft. Worth, Houston, Baltimore, Louisville, Cleveland and San Francisco – are also among the top 15 cities in total number of bedbug customer calls year-to-date for 2013. Once relegated to primarily major cities, bedbugs are good travelers and have been reported by nearly all of the Terminix branches throughout the country.

Bedbugs are usually transported from one location to another as people travel. They can travel in the seams of luggage, carry-on bags, folded clothing and furniture. Because bedbugs can go several months without a blood meal, it’s a good idea to thoroughly inspect luggage and mattresses when traveling. When bedbugs bite, they inject an anesthetic and anticoagulant that prevents a person from feeling the bite. Because these bites generally occur while people are sleeping, they don’t realize they’ve been bitten until small marks appear which are generally slightly swollen, red and may itch.

Terminix offers the following tips to mitigate the risk of being bitten or transporting bedbugs:

With a global network of more than 7,300 company-owned, franchise and licensed locations, Memphis-based ServiceMaster is one of the world’s largest residential service networks. The company’s high-profile brands are Terminix, TruGreen, American Home Shield, ServiceMaster Clean, Merry Maids, Furniture Medic and AmeriSpec. Through approximately 20,000 corporate associates and a franchise network that independently employs an estimated 31,000 additional people, the ServiceMaster family of brands provided services and products to approximately 8 million customers during the last 12 months. The company’s market-leading brands provide a range of residential and commercial services including termite and pest control; lawn, tree and shrub care; home warranties and preventative maintenance contracts; furniture repair; home inspections; home cleaning; janitorial services; and disaster restoration. Go to http://www.servicemaster.com for more information about ServiceMaster or follow the company at twitter.com/ServiceMaster or facebook.com/TheServiceMasterCo.