Bradon McDonald and Alexander Pope, both fashion design graduates of FIDM, will appear on the 12th season of Lifetime’s Project Runway, which starts on July 18, 2013 at 9/8c. Bradon and Alexander are part of a long tradition of FIDM graduates, including former winner Leanne Marshall, who have competed on the hit fashion docu-series. 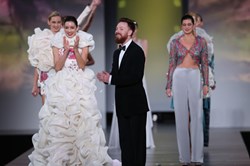 Bradon McDonald graduated from FIDM in 2013

On July 18, 2013 at 9/8c, the 12th season of Project Runway will kickoff on Lifetime, featuring two FIDM Graduates: Bradon McDonald and Alexander Pope. The two designers, who both majored in fashion design at FIDM/Fashion Institute of Design & Merchandising, will join 10 other competitors to “Make It Work” on the hit fashion docu-series, hosted by Heidi Klum (who also serves as a judge), mentor Tim Gunn, and judges Nina Garcia and designer Zac Posen.

Bradon, an art aficionado and Julliard-trained modern dancer, has a home studio where he experiments with fabric manipulation and uncommon hand-sewing techniques. Alexander, who lives and works in Ridgewood, NY, works in costume construction for Broadway shows and has been a makeup artist for editorials and runway shows for a decade. He says he is influenced by music and loves playing opera, electro, or Broadway musicals while designing. "I bring not only fashion, but a pretty extensive costume background to the table," he says. "I think that knowledge really helps me design some creatively interesting clothing."

FIDM/Fashion Institute of Design & Merchandising is a co-educational, specialized, private college dedicated to educating students for the Fashion, Graphics, Interior Design, and Entertainment industries. Known as a one of the top fashion design schools, FIDM is also a leading graphic design school and digital media college. Visit fidm.edu for more information.