The computer-generated works of the American artist Brenna Murphy – incorporating nature-inspired motifs, mechanical objects, and folk art symbols shaped and texturized through contemporary technology - are on display in an ongoing exhibit at Kunstverein Düsseldorf through September 29, 2013. 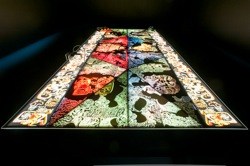 Combining the language of ancient and folk symbolism with modern technology.

The works of American artist Brenna Murphy (born 1986) are graphical and three-dimensional sculptures and reliefs that combine the language of ancient and folk symbolism with modern technology. Her computer-generated works are being shown in an ongoing exhibit at Düsseldorf’s Kunstverein through September 29, 2013.

Murphy’s works incorporate constantly and rapidly improving digital technology, such as graphic and design software, and room for artistic expansion. Many of the pieces have only been available for viewing online. The exhibit combines the pieces with musical instruments, sound installations and individual recordings by the artist, enhancing the works by combining ancient and modern sound and symbol language.

The city’s tourism office is offering hotel and city specials for many of the city’s art-related events throughout 2013, including the Brenna Murphy exhibit. The travel package called “Welcome2Art” can be booked right from the tourism office’s website at http://www.duesseldorf-tourismus.de/nc/en/hotel-packages/hotel-package-welcome2art. Prices start at €58 per night per person based on double-occupancy for a 2-3 star hotel in the city center and at €93 per person for a 4-5 star hotel. All packages include breakfast, tickets for 2 permanent exhibits at Düsseldorf Museums (1 for Museum Kunstpalast, 1 for Kunstsammlung NRW/K20), a Düsseldorf Welcome Card (free public transportation within city limits, plus more than 40 free or reduced admissions to city attractions), a city information package, and 1 Merian city guide.