The Millennium Project introduces the Global Futures Intelligence System as a new tool for organizing and advancing global participatory research and improving decisionmaking. 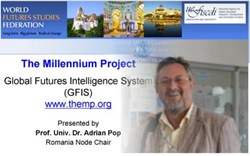 The world needs a way to think together about the future, drawing on the collective intelligence of humanity. The GFIS is designed to do this.

The Global Futures Intelligence System (GFIS) developed by The Millennium Project was presented at the 21st World Conference of the World Futures Studies Federation “Global Research and Social Innovation: Transforming Futures,” by Adrian Pop, Professor at the National University of Political Studies and Public Administration in Bucharest and Chair of the Romania Node of The Millennium Project. As an evolving system based on synergies among software, information, and experts, a vast body of intelligence/knowledge/data and access to global experts, as well as an interactive decisionmaking support dashboard, GFIS presents itself as the first globally-oriented collective intelligence system that does not focus on a single issue, ideology, or country, an objective also shared by the WFSF.

“The world needs a way to think together about the future, drawing on the collective intelligence of humanity. The GFIS is designed to do this,” explains Jerome Glenn, Executive Director of The Millennium Project. GFIS could help top executives, experts, and the general public to monitor and better anticipate future change. It was developed with funding from the Rockefeller Foundation, and initially launched at the Woodrow Wilson International Center for Scholars in Washington, D.C. in January 2013.

The WFSF, as it was born in Paris, in 1973, but conceived in Bucharest, in 1972, chose to celebrate its 40th anniversary in the capital city of Romania. Hosting the 21st World Conference of the organization, Bucharest offered a perfect location for an event which perhaps will be remembered both as a ‘bridge over time’ and opening towards an entirely new era of engagement for a new generation. Throughout three days, at the end of June 2013, leading futurists from around the world met to discuss a variety of possible futures: from complex integral, global and regional futures, to futures in ecosystems, education, health, culture, society, arts and lifestyle, and futures in leadership and geopolitics, economics and currencies. The past, present, and future of future studies were also high on the conference agenda, while workshop spaces provided brainstorming opportunities on various foresight issues.

The subjective but inescapable feeling of the past, present and future “joining hands” in Bucharest was highlighted by at least three circumstances: first, the conference sessions took place at the University of Economic Studies, which was celebrating its 100th year of existence. Second, the WFSF 40th anniversary dinner was hosted by the National Bank of Romania, an institution which is currently in its 133rd year of existence. Third, the conference gathered participants belonging to at least three generations: the founders of WFSF (including Professor Johan Galtung of Norway, and Professors Mircea Malita and Pavel Apostol of Romania), the mid-career fellow members of the organization, and the new wave of promising masters and PhD students from around the world whose major subject is futures studies.

To the overall success of the WFSF conference greatly contributed its excellent organization by the two co-chairs of the conference committee, Dr. Jennifer Gidley, WFSF President, and Professor Adrian Curaj, UEFISCDI General Director, as well as the generous support the event received from higher Romanian authorities, including Professor Remus Pricopie, minister of Education, and Professor Mugur Isarescu, Governor of the National Bank of Romania.

The Millennium Project connects futurists to improve global foresight via its 49 Nodes around the world. It was established in 1996. It produces the annual "State of the Future" reports, "Futures Research Methodology" v.3.0, the Global Futures Intelligence System, and has received funds from UN organizations, multinational corporations, universities, foundations, and the governments of Argentina, Azerbaijan, Dominican Republic, Egypt, Kuwait, Montenegro, South Africa, South Korea, and the United States.