Perez Hilton made an appearance on Maria Menounos' new online talk show, “Conversations with Maria." In the interview, Hilton talks about fatherhood, looking for love, thoughts of suicide, and how his parents tried to “cure” his homosexuality. 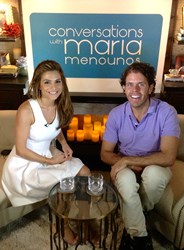 I would have rather killed myself than go through life hating Monday through Friday, hating 9AM to 5PM.

(conversationswithmaria.com) — Perez Hilton made an appearance on Maria Menounos' new online talk show, “Conversations with Maria,” last week. In his appearance, Hilton talks about fatherhood, looking for love, thoughts of suicide, and how his parents tried to “cure” his homosexuality. Hilton also discusses which celebrities of this generation he believes will be future Hollywood legends.

On His Thoughts of Suicide:
Hilton says, "When I was [working at STAR Magazine], I became depressed, like severely depressed, and that was the first time I’d ever experienced depression in my life to the point of having suicidal thoughts daily. Like, 'Today I’m going to slit my wrists. Today I’m going to jump off my building.' I would spend an hour in the shower before work just sitting…I felt safe sitting in the fetal position with the water on my back and I called my mom and she said 'Mijo, that’s why they call it work, they don’t call it happy.' I just refused to accept the notion that I would have to go through life hating what I was doing for a living…I would have rather killed myself than go through life hating Monday through Friday, hating 9AM to 5PM."

On Growing Up Gay with Parents Trying to “Cure” Him:
Hilton says, "I honestly think I was born gay and I think most people are. I remember probably having similar feelings, but not in a sexual way, when I was six and I got naked with the boy next door and I got in trouble for it and my parents took me to a psychologist, a very Cuban thing to do. I guess to try to cure me or something. The psychologist was like, 'Your son is exceptionally bright and normal and that’s normal.'"

On Pink, Beyonce, and Being “Normal”:
"Being normal is a choice you make. I look at someone like Pink," says Hilton, "Pink chooses to be normal even though she’s a superstar. Whereas Beyonce chooses to be Beyonce 24/7. If she wanted to she could be like Pink…I want to be more like Pink than Beyonce...not that I’m either, I’m like Madonna."

On Creating an Alter-Ego for His Son:
Hilton says, "He’ll probably be bullied out and about, because people might say things to me in front of him when we’re in public…That’s even one of the reasons why, even though his name is Mario, I call him Perez Jr. I want him to have an alter ego as well so when people do say things that are hurtful about his dad or hurtful about him hopefully it won’t hurt as much because they don’t really know him...those people know you as Perez Jr. but you’re not Perez Jr. so it doesn’t matter what they say."

On Becoming a Bully:
“One of the things [Oprah] said was, 'Listen, life has the lessons for you and if you don’t listen the universe will smack you upside the head.' And that’s what happened," Hilton says, "I had not only stopped listening, I had lost touch with reality. I drank the kool aid…I became a monster, I became this character fully."

On Being Banned from Chateau Marmont:
Hilton says, "I’m still banned from the Chateau Marmont, not because I got Courtney Love crazy and I did anything that would get me kicked out of there, but because I’m me and my presence there would upset celebrities. "

On Being on Grindr:
Hilton says, "I’m open to meeting new people. I’m on Grindr. I just use it to meet people, I’m not on it for sex. I saw your assistant on there...I think every gay guy is on there."

On Being Blacklisted by People Magazine:
Hilton says, "People magazine, I’m on like a blacklist. They’ll never write about me in people magazine or mention me on people.com because they view me as competition. I don’t view anyone as competition because I’m just doing my own thing."

On Flirting With Gay Men:
"If I’m at a bar and I see a guy I like, I’ll rarely go up to them," says Hilton, "In the back of my mind, I assume all gay guys think I’m a douche bag…a lot of gay people are ashamed of me, embarrassed of me, think that I’m a bad role model...It’s not easy."

On If His Website Suffered in 2010 After His Personal “Transformation”:
"[My website suffered] in the beginning because traffic went down, but now it’s gone back up again…I made the decision for myself and it was the right thing to do, not for any economic decision," says Hilton.

On Who This Generation’s Hollywood Legends Will Be:
Hilton says, "[Jennifer Lawrence] is gorgeous, very talented and really funny. There’s something magnetic about her…Rihanna’s going to have a very long career, if she chooses too. And Miley Cyrus…she’s smart. She knows how to push people’s buttons and get people talking."

Conversations with Maria Menounos is a one-on-one interview series featuring Extra Host Maria Menounos, engaging stars and social influencers in long-form interviews for the web. Guests from all facets of the entertainment industry discuss their journeys, passions, inspirations and ambitions with Maria. From becoming the youngest person to host and report for Entertainment Tonight, The TODAY Show and NBC Nightly News to becoming the only reporter to interview the entire Obama family together, there is no host more suited than Menounos. In 2011, she launched online broadcast network, AfterBuzzTV.com, which plays to weekly audience of 20 million people from over 75 countries.

Produced by Underman/Omegagirl Productions in partnership with Telepictures Productions and The Weinstein Company, "Conversations with Maria" is available on iTunes.com, extraTV.com and on all mobile platforms. For further information about the show, visit conversationswithmaria.com