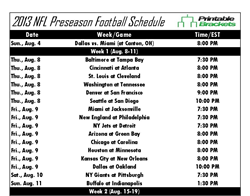 The wild offseason is about to give way to another great 17-week drama.

As the dog days of summer continue across the United States, the start of the 2013 NFL season is now just weeks away. While the road to hoisting the Lombardi Trophy begins with 32 training camps, teams will see in-game action for the first time during preseason play in August.

Now, an online leader in schedules and tournament brackets has released a printable and complete 2013 NFL preseason schedule to get fans ready for the upcoming season.

“It’s almost hard to believe that the start of the NFL season is nearly here,” said Printable Brackets spokesperson Zaniel Worth. “It feels like yesterday fans were filling out Super Bowl squares, but now the wild offseason is about to give way to another great 17-week drama.”

The 2013 NFL preseason schedule opens up with the annual Hall of Fame Game in Canton, Ohio. The Dallas Cowboys will clash with the Miami Dolphins to close out Hall of Fame weekend on Sunday, August 4th. The official Week One of preseason will begin on Thursday, August 8th.

“Individual preseason games generally don’t garner much national attention,” said Worth. “However, the Week One exhibition meeting between the Patriots and Eagles in Philadelphia is sure to generate plenty of interest.”

New England will be on the field for the first time since the arrest of tight end Aaron Hernandez, who was charged with first-degree murder in June. Hernandez was jailed without bail on the same day he was released by the Pats.

In addition to the complimentary 2013 NFL preseason schedule, Printable Brackets has created complete schedules for all 32 NFL teams.

“NFL players and coaches constantly talk about taking things one game at a time. Luckily, that cliché doesn’t apply to fans,” said Worth. “Whether it’s to see when rivalry games are, how the road to the playoffs is shaping up, or to make travel or party plans, fans are always looking ahead.”

Fans can also get ready for the upcoming year with fantasy football draft sheets. Once the season is underway, fans can follow the action with NFL survivor pools, confidence pools and pick em sheets. These sheets are also printable, instantly downloadable and completely complimentary.

“The start of the season is less than two months away and we have everything fans need to get ready for kick-off,” said Worth.

For the 2013 NFL preseason schedule, printable schedules for all 32 teams or dozens of other items to gear up for the upcoming season, please visit PrintableBrackets.net.