Prior to Arriving at University of Washington Medical Center, Two Hospitals Told Stacie Sumandig She Wouldn’t Survive the Weekend 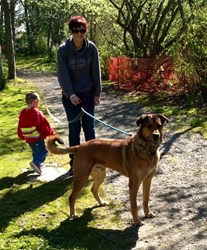 Stacie Sumandig is no stranger to heart problems. Born with a congenital heart defect called coarctation of the aorta, a narrowing of the major artery that carries blood away from the heart to the body, she had her first heart surgery at age 4, and an aortic valve replacement at age 31. But last October, when a virus attacked her aortic valve and destroyed her heart, the news she received at two different hospitals was grim: she probably wouldn’t make it through the weekend.

“You can’t even process that,” said Sumandig. “I’m 40, and I have two kids and two stepkids, and I thought, that is not an option.”

Sumandig was transferred to the University of Washington (UW) Medical Center in Seattle, where doctors offered her one final option that hadn’t been available at the two previous hospitals: the SynCardia temporary Total Artificial Heart.

"Stacie presented a very difficult problem for us from both a medical and surgical standpoint,” said her surgeon, Dr. Nahush Mokadam, co-director of heart transplantation and director of mechanical circulatory support at UW Medical Center. “She had suffered a large heart attack in her right ventricle and had ongoing heart failure in both the left and right sides of her heart (right greater than left). In addition, she had undergone a complex aortic valve reconstruction years prior, but her aorta had separated from her heart by several centimeters, which likely led to a kink in her right coronary artery, causing her massive heart attack.

“I did not think a repeat reconstruction would be tolerated due to her failing heart, so I counseled her on the Total Artificial Heart. It was the only option that would allow me to address the separation of her aorta while supporting her heart function, and provide her with a durable bridge to her eventual heart transplant."

Four days after Sumandig was admitted to UW Medical Center, on Nov. 6, 2012, Dr. Mokadam removed her failing heart and replaced it with the SynCardia Total Artificial Heart.

On Dec. 21, 2012, Sumandig was discharged from the hospital to wait for a matching donor heart at home using the Freedom® portable driver, the world’s first wearable power supply for the Total Artificial Heart.

“The Freedom driver gave me a fairly normal life while I was waiting for my donor heart,” said Sumandig. “I went shopping. I went on walks with my sister at the park. We had a family gathering, and I played badminton and cornhole. I even went bowling.”

On May 21, after 196 days of life with the Total Artificial Heart, Sumandig received the call that a matching donor heart had become available. Two days after the transplant, she was breathing on her own and after two more days, she was up walking the hospital hallways. Sumandig was discharged home with her new donor heart on June 6.

“I miss the team at University of Washington a lot,” said Sumandig. “I will always have a place in my heart for them. They were so kind, so good, so thorough, and I’m just so thankful that I could be a part of Dr. Mokadam’s miracle. I can’t thank him enough. Now I’ll be able to grow old with my family.”

SynCardia Systems, Inc. (Tucson, AZ) is the privately-held manufacturer of the world's first and only FDA, Health Canada and CE approved Total Artificial Heart. Originally used as a permanent replacement heart, the SynCardia Total Artificial Heart is currently approved as a bridge to transplant for people suffering from end-stage heart failure affecting both sides of the heart (biventricular failure). There have been more than 1,100 implants of the Total Artificial Heart, accounting for more than 300 patient years of life on the device.

The Total Artificial Heart provides immediate, safe blood flow of up to 9.5 liters per minute through each ventricle. This high volume of blood flow helps speed the recovery of vital organs, helping make the patient a better transplant candidate.

Stacie Sumandig plays cornhole in her backyard wearing the Freedom® portable driver that powers her SynCardia Total Artificial Heart in the Backpack. She received her matching donor heart on May 21, 2013.