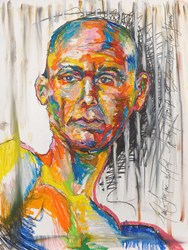 If I took the usual six months plus to paint my subjects, this opening would take place five years from now. And it wouldn’t have the same energy. The "Spirit of Santa Fe" show is about my wild, torrid love affair with this city,” says Firestone.

Portrait artist Robbi Firestone’s Old Santa Fe Trail studio is a whirl of activity as the artist welcomes subjects for sittings, painting “Gestural Impressions.” These visual studies are not full on portraits, but impressions of a moment, an invitation to sense Spirit; an artist giving her love to this place and its exceptional citizens of Santa Fe, NM.

“…this is the gift of training and expertise - the ability to extract an enormous amount of meaningful information from the very thinnest slice of experience.” ― Malcolm Gladwell, Blink

Firestone continues to refine her portraits. It’s just a few weeks before her August 9 Spirit of Santa Fe exhibition at Casweck Galleries opens, serving as the artist’s own local debut after relocating from Seattle to Santa Fe earlier this year. Casweck is located at 203 W. Water Street, Santa Fe, NM, 87501.

Upping the stakes one more degree, oil portrait artist Robbi Firestone is also debuting a new interpretation of her art form, “Gestural Impressions.” In a bold self-challenge, Firestone has compressed her usual 6-to-9 month portrait creation time-frame. This is not just about re-approaching the portrait in a more modern, playful way, but also about the wisdom of first impressions and intuitions when encountering a new person, as expressed by Malcolm Gladwell in his book, Blink: The Power of Thinking without Thinking.

Firestone says, “If I took the usual six months plus to paint my subjects, this opening would take place five years from now, at the earliest, and it wouldn’t have the same energy.”

“The Spirit of Santa Fe show is about my love affair with this city,” says Firestone, “and my quest to discover it through the people who define and exemplify it—by painting their portraits. In a blink I've fallen in love with this elusive ‘Spirit of Santa Fe’: the land, of course, and through this project, its people. My visual study of a brave range of citizens is meant not as a realistic portrayal of folks, but a gesture, literally and figuratively, of an artist giving my love to this land and its exceptional citizens.”

For this series, trusted advisors nominated the subjects, who exemplify the spirit of Santa Fe and represent its rich diversity. They include beloved living treasure Judge Mike Vigil; Doctor of Oriental Medicine Fiquet Hanna Duckworth; and Shibana Singh, a yoga teacher, dietician, and healer.

With every project, Firestone insists on giving back, so 3%+ of sales will be donated to Santa Fe’s, The Food Depot.

Casweck Gallery features the works of renowned artist Ernest Chiriacka (1913-2010), known for his exquisite historical Western and Native American paintings, as well as his iconic work in the genres of pin-up and pulp illustration.

Veteran filmmaker Craig Clark will also create a short, filmed documentary asking each muse, “What is the Spirit of Santa Fe; What does spirit mean to you?” to be displayed at the gallery during Firestone’s show; the month of August.