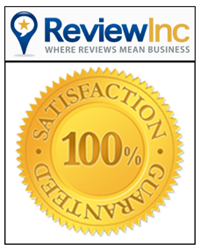 'We were particularly interested in the potential for a ‘negative bias’ that we discovered,' said ReviewInc’s Chief Operating Officer, Henri Isenberg.

A new study conducted by review management company, ReviewInc, exposes new insight into the potential “bias” in the ratings businesses receive on public review sites. The study, which surveyed 1,000 consumers and examined over 25,000 non-public business ratings, shows a significant disparity between customers’ perceptions of these businesses and the reviews and ratings found on today’s top public review sites.

The study revealed that 60% of consumers felt online review sites provided “balanced” information—a percentage consistent with another recent study showing that, in 2013, 79% of customers trust online reviews as much as personal recommendations. While more and more customers today are putting their faith in online reviews, however, ReviewInc’s study sheds light on a never-before explored element of doubt that may exist in regards to online reviews platforms.

The study showed a surprisingly large portion of customers researching online are concerned with the presence of biased information on public review platforms. 17% of consumers surveyed admitted to believing review sites showed businesses in a more positive light, while 19% of consumers stated they believed that review sites allowed for a negative bias.

“We were particularly interested in the potential for a ‘negative bias’ that we discovered,” said ReviewInc’s Chief Operating Officer, Henri Isenberg, “and the implications that this bias could have on both businesses and consumers.”

ReviewInc’s study, which analyzed over 25,000 businesses’ “private” consumer ratings compared to their ratings on “public” review sites, found a significant difference between the two platforms and shed light on a number of drastic inconsistencies.

According ReviewInc’s research, while the private business ratings yielded an average of 4.3 stars (on a 5 star scale), the “public” ratings averaged only 3.6 stars—revealing a 0.7 gap between private reviews the business received versus what consumers were actually posting on line.

While disparities like these don’t indicate review sites themselves are biased, they do suggest a system that makes it easier for perhaps overly-negative and inaccurate representations to dominate. Findings like these explain, in part, why review management is growing increasingly important.

“This gap confirms the presence of a negativity bias on public review sites,” said Isenberg, “our goal is to balance-out this bias by providing the tools that businesses need to ensure they’re getting reviews and ratings that reflect accurately on their customers’ opinions.”

About ReviewInc: Based in Los Angeles, CA, ReviewInc is an industry leading review management company that has helped hundreds of businesses recover their reputation, grow their brand, boost their rankings, and gain new customers with online review management.