The trio of Animal Support co-founders, Julian Omidi, his brother Dr. Michael Omidi, and Maria Abaca, are offering a reward for the person or persons who attacked an 11 year old Siberian Husky named Logan. The innocent animal died after acid was thrown onto his face which inspired the dog’s owners to draft ‘Logan’s Law’ in Michigan. 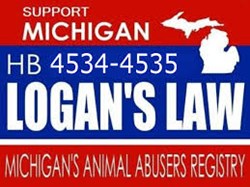 Animal Support was founded by Julian Omidi, his brother Dr. Michael Omidi, and Maria Abaca who are all life-long animal welfare advocates. Shocked and appalled by the tragic death of a Siberian Husky named Logan, the trio of Animal Support co-founders are united in backing ‘Logan’s Law’ in Michigan.

The proposed connected bills HB4534 and HB4535 were recently introduced before the Michigan state legislature and stipulate fines and incarceration penalties for animal abuse convictions. In addition, ‘Logan’s Law’ will create an animal abuser registry similar to the sex offender registry.

Animal Support is offering a $500 reward to anyone providing information leading to the arrest and conviction of the person or persons responsible for this senseless tragedy. Logan’s owner Matt Falk felt he had to do something after his beloved pet was killed. He contacted his state representative, initiated the reward and finally had the bill drafted to raise awareness about animal rights.

If you or anyone you know can help bring Logan’s killer to justice, please contact Animal Support via Facebook or the ‘Logan’s Law’ website. Animal Support is proud to help Matt and his followers. The organization hopes that once ‘Logan’s Law’ is passed that it will become a model for future legislation on the national level.

Animal Support (http://www.animalsupport.org) is dedicated to ending animal abuse by recommending charities and organizations that are fighting to stop the horrific mistreatment of pets everywhere. The organization is currently compiling a network of resources committed to animal protection, rescue and adoption and will soon make it available on the website.

To join the fight to end animal abuse and neglect or get more information about Animal Support, please send a message using the website’s Contact Us function. Follow us on Pinterest and Twitter and check out the Animal Support Facebook page at: facebook.com/animalsupport.org.