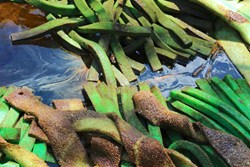 Smith continued, “The disaster in Lac-Megantic, Quebec is the most recent in a disturbing trend of oil spills that began in March of this year with the ExxonMobil Pegasus pipeline break, along with other recent spills in Western Canada.

Opflex Solutions, Inc. announced today that it received the fingerprinting results from OPFLEX® Technology deployed and demonstrated downstream in the Chaudiere River from the Lac-Megantic oil train disaster on July 10th and 11th, 2013.

Scott Smith, Founder & CEO, of Opflex Solutions, Inc., stated, “Fingerprinting results indicate there is heavy crude oil in the river continuing to flow downstream from the Lac-Megantic oil train disaster. In a 24 hour period, approximately 200 – 1,400 parts per million of various polycyclic aromatic hydrocarbons accumulated into the Open-Celled Elastomeric OPFLEX mobile eelgrass we deployed in the water column. It is essential to continue to monitor what is in the water and deploy the best available technology to remove the dangerous crude oil and related chemicals from the water, drainage, and sewer systems.”

Video footage and prior news coverage of the OPFLEX deployment downstream from the Lac-Megantic oil train disaster can be seen online: http://youtu.be/La27bG8U2CI

Smith continued, “The disaster in Lac-Megantic, Quebec is the most recent in a disturbing trend of oil spills that began in March of this year with the ExxonMobil Pegasus pipeline break, along with other recent spills in Western Canada. I am pleased to announce that OPFLEX Technology has joined forces with former U.S. Navy SEAL Lew Knopp, Founder & CEO of Templar Titan, a full serviced global risk mitigation service company. Templar Titan’s assemblage of military & law enforcement specialists will be able to rapidly deploy, fingerprint the water column in disasters, track the contamination downstream, and simultaneously deploy the best available technology to remove oil and related toxic contaminants from the water so communities can be properly protected.”

Mr. Knopp stated, “The combination of OPFLEX Technology and Templar Titan’s experience operating in austere environments in response to emergencies and disasters; together provide a rapid response capability to contain, control and combat the further spread of oil spilled into rivers, lakes and other bodies of water. Our experience operating in the marine environment matched with our capability to quickly develop and implement a wide range of contingency plans; provides neighborhoods, communities, governments and corporations economical and environmentally conscious solutions.”

The Open-Celled Elastomeric structure of OPFLEX Technology allows it to attract, adsorb, and remove all types of oil including diluted bitumen “tar sands” while repelling water. First introduced during the 2010 Deepwater Horizon oil spill in the Gulf of Mexico, OPFLEX Technology was used, approved, and endorsed by BP America. Over 2 million square feet of OPFLEX was used by BP to remove crude oil from the coastal wetlands and near the site of rig explosion. BP re-used OPFLEX products an average of 25 times, effectively using 50 million square feet. OPFLEX not only adsorbed more oil than the typical white sorbents, but as an Open-Celled elastomeric foam sponge, OPFLEX can be squeezed or centrifuged to remove and recover the oil quickly and prevent damage to sensitive ecosystems.

BP’s deployment of OPFLEX Technology was reported in a November 15, 2010 USA Today cover story: http://usatoday30.usatoday.com/money/industries/environment/2010-11-15-gulfcleanup15_CV_N.htm. OPFLEX was the only new technology deployed that removed oil, recovered oil, was re-cycled, and re-deployed by BP out of the 43,000 ideas submitted. Recently, Mr. Smith began collaborating with the Woods Hole Oceanographic Institution and its scientists in the development and commercialization of Open-Celled Synthetic Eelgrass. The mobile version of eelgrass was recently deployed downstream from the Lac-Megantic, Quebec oil train disaster.