The firm’s assignment will enable the facility to efficiently house additional airplanes and accommodate more passengers for one of the world’s largest annual sporting events. 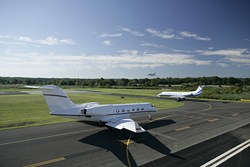 (Morristown Municipal Airport) reached out to us for a quick two-week turnaround on a plan to ease the congestion that increased traffic the Super Bowl is likely to cause.

The Louis Berger Group, Inc. (Louis Berger) recently completed an aircraft parking plan for the Morristown Municipal Airport to accommodate an increase in travelers to and from the New Jersey area during next year’s Super Bowl. Super Bowl XLVIII will be held at MetLife Stadium in East Rutherford, N.J., on Feb. 2, 2014.

The New York City metro area and its airports are expecting an influx of both vehicular and air traffic. With a proper plan to organize the aircraft on the ground at the airport, smaller facilities like the Morristown Municipal Airport will be able to house a larger number of planes overnight as well as move them in and out quickly.

“The FAA wants to ensure airports in the New York/New Jersey region are prepared to accommodate Super Bowl activity,” said Marc Champigny, director of U.S. aviation. “They reached out to us for a quick two-week turnaround on a plan to ease the congestion that increased traffic the Super Bowl is likely to cause.”

The Federal Aviation Administration (FAA) Eastern Region is using Louis Berger’s plan as an example of what other airports in the region should be doing to accommodate Super Bowl-related airplane traffic.

About The Louis Berger Group, Inc.

The Louis Berger Group is an internationally recognized consulting firm that provides engineering, architecture, program and construction management, environmental planning and science and economic development services. We are a trusted partner to federal, state and local government agencies; multilateral institutions; and commercial industry. To this diverse client base, we bring strategic vision and an entrepreneurial spirit, developing innovative solutions to some of the world’s most challenging problems. With a resource base of more than 6,000 professionals and affiliate employees in more than 50 countries, we are able to respond to local conditions while providing clients with the technical resources and rapid response capabilities of a leading global organization.