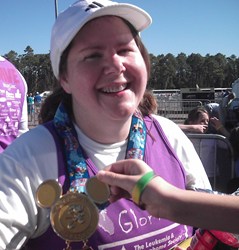 Every four minutes, someone is diagnosed with a blood cancer.

Gloria Rand, SEO Copywriter & Social Media Consultant has committed to run the Walt Disney World Marathon on January 12, 2014 to benefit The Leukemia & Lymphoma Society (LLS). Ms. Rand will spend the next five months preparing for the 26.2 mile race with the help of LLS's Team in Training.

This is the second time that Gloria Rand will be running at Disney World on behalf of LLS. "With Team in Training's help, I finished the 2006 Disney World Marathon, but I never dreamed that I would tackle 26.2 miles again," said Ms. Rand. "I've decided to partner with Team in Training and raise money for LLS again because a close family friend has been diagnosed with Hodgkin's disease, and is currently undergoing chemotherapy treatments."

Leukemia, lymphoma and multiple myeloma are the major forms of blood cancer. Leukemia is still a leading cause of death in children. Every four minutes, someone is diagnosed with a blood cancer and every ten minutes, someone passes away. Through charitable events like the Walt Disney World Marathon, LLS hopes to get closer to finding the cause and someday cure for leukemia and related cancers like Hodgkin’s disease.

Gloria Rand has personally committed to raise $2,500 for the Leukemia & Lymphoma Society. She has also pledged to donate 5% of her company's gross revenues between now and December 31, 2013.

To learn more about Gloria Rand's progress, and to make a contribution to the Leukemia & Lymphoma Society, click this link: [http://pages.teamintraining.org/ncfl/wdw14/GloriaRand