Tamils for Obama: US Congress Urged to Support Independence Referendum in Northeast of Sri Lanka

Following the example of the successful referendum and independence in South Sudan, Congress members in both houses were urged by Tamils for Obama to pass a resolution calling for a similar referendum in the northeast of Sri Lanka. 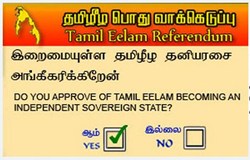 Since 1948, the Tamils have been the victims of a systematic ethnic cleansing program by the majority Sinhalese controlled national government. This program was designed to drive as many Tamils as possible out of the country and to suppress the rest.

Tamils for Obama sent a letter to every member of both houses of Congress asking them to push for a referendum on independence in northeastern Sri Lanka.

"We urge you to pass a resolution in both houses of Congress" the letter said, " supporting any effort by President Obama to push forward a referendum on independence in northeast Sri Lanka."

The letter mentioned ethnic persecution in Sri Lanka that has gone on ever since independence in 1948. It also referred to a possible solution, similar to the referendum in and subsequent independence of South Sudan.

"Since independence in 1948," the letter said, "the Tamils of Sri Lanka have been the victims of a systematic ethnic cleansing program by the majority Sinhalese-controlled national government. This program was designed to drive as many Tamils as possible out of the country and to suppress the rest.

"This 65-year ethnic cleansing campaign," the letter went on, "included government-organized nationwide ethnic rioting (in 1956, 1958, 1977, 1981 and 1983), large numbers of native-born Tamils stripped of Sri Lankan citizenship, and end of the bilingual Tamil/Sinhalese system as Sinhala became the only legal language, and since the end of the civil war with its massacres and atrocities, in May 2009,resettlement of Tamil-inhabited areas by Sinhalese."

In the letter Tamils for Obama then went on to suggest a remedy. "There is a proven solution to this situation," the letter said. "In 2011,a referendum sponsored by the US and UN was held in southern Sudan. The natives, victims of a decades-long ethnic civil war voted to create their own new nation of South Sudan.

"We believe that this approach should be applied to northeastern Sri Lanka. There should be a referendum asking the people of that area whether they want an independent state. We are confident that their votes will validate our expectation that the population of northeast Sri Lanka will vote heavily for a new, safe and secure, sovereign state."

In concluding the letter, Tamils for Obama wrote "We urge you to pass a resolution in both houses of Congress supporting any effort by President Obama to push forward such a referendum in northeast Sri Lanka.

"We hope that with your support Congress will act quickly on this resolution."