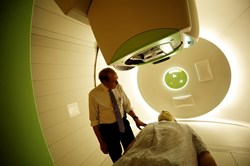 Proton therapy, using high-energy subatomic particles, may offer a precise, organ-sparing treatment option for children with high-risk forms of neuroblastoma. For patients in a new study of advanced radiation treatment, proton therapy spared the liver and kidneys from unwanted radiation, while zeroing in on its target.

Owing to collaboration between Children’s Hospital and radiation oncologists at Penn Medicine, the Roberts Proton Therapy Center, where the study was conducted, is the first proton therapy facility in the U.S. conceived with pediatric patients in mind from the earliest planning stages.

Protons, the positively charged particles in an atom’s nucleus, are used in therapy to destroy DNA in tumors and prevent cancer cells from multiplying. In children, this therapy is often used against spinal tumors. CHOP has recently been directing protons at neuroblastoma, long a special focus of the Hospital’s clinical and research programs.

Neuroblastoma, the most common solid tumor of early childhood, strikes the peripheral nervous system, usually appearing as a solid tumor in a young child’s chest or abdomen.

Pediatric oncologists have an arsenal of weapons against neuroblastoma, but high-risk forms of this cancer present a particular challenge, often frustrating conventional treatment from the start or recurring in a resistant form.

In planning radiation treatment for each child, the study team determined that 11 patients should receive proton therapy, and that two other patients, because of their specific anatomy and the location of their tumors, should receive intensity-modulated X-ray therapy (IMXT). In IMXT, radiologists sculpt the radiation emitted from 7 different angles to modify radiation dosages in and around the targeted area.

None of the 13 patients had local disease recurrence or acute organ toxicity. For 11 of them, proton therapy provided the best combination of target coverage and organ sparing. “Protons are heavier than the particles in X-rays and have more stopping power,” said Hill-Kayser. “They deposit 90 percent of their energy precisely at the tumor site, with nearly zero radiation away from the tumor. That protects healthy organs—which, as growing tissues, are especially vulnerable to radiation damage in young children.”

The fact that individual characteristics made IMXT preferable to proton therapy in two children, said Hill-Kayser, underscores the need to meticulously customize radiation treatment to each patient. Overall, the current study shows that proton therapy should be considered for children with high-risk neuroblastoma. She added, “To better assess the use of proton therapy against high-risk neuroblastoma, we’ll need to study larger numbers of patients and do long-term follow-up. However, this represents a great start.”

Co-authors of this study were Robert Lustig, M.D., Zelig Tochner, M.D., and Stefan Both, Ph.D.; like Hill-Kayser, all are from the Department of Radiation Oncology of the Perelman School of Medicine at the University of Pennsylvania. Co-authors Anne Reilly, M.D., Naomi Balamuth, M.D., Richard Womer, M.D., John Maris, M.D., Stephan Grupp, M.D., Ph.D., and Rochelle Bagatell, M.D., are from the Cancer Center for Children at CHOP.

About The Children’s Hospital of Philadelphia: The Children’s Hospital of Philadelphia was founded in 1855 as the nation’s first pediatric hospital. Through its long-standing commitment to providing exceptional patient care, training new generations of pediatric healthcare professionals and pioneering major research initiatives, Children’s Hospital has fostered many discoveries that have benefited children worldwide. Its pediatric research program receives the highest amount of National Institutes of Health funding among all U.S. children’s hospitals. In addition, its unique family-centered care and public service programs have brought the 516-bed hospital recognition as a leading advocate for children and adolescents. For more information, visit http://www.chop.edu.