MetaMoJi has released its award-winning handwriting conversion program, mazec2, for 13 languages on the Android platform. Handwritten notes can be converted to text in real time in any app or as a batch within Note Anytime or 7 Notes. 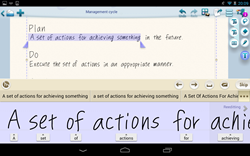 Mazec2 is a state-of-the-art handwriting recognition engine which has an extremely accurate predictive engine for recognizing words and phrases in each language.

MetaMoJi has just released its award winning handwriting conversion engine “mazec2” for 13 languages on the Android platform. Mazec2 is a state-of-the-art handwriting recognition engine which has an extremely accurate predictive engine for recognizing words and phrases in each language. Now, users can convert their handwriting to digital text in any of the 13 supported languages. On the Android platform, mazec2 also serves as an alternative to keyboard entry and permits users to handwrite their emails, browsing terms or even blog entries by converting handwriting to text on the fly. This release completes the set of native language authoring for English, French, German, Italian, Spanish, Dutch, Portuguese, Russian, Polish, Japanese, Chinese (Simplified), Chinese(Traditional), and Korean.

Mazec2 goes well beyond other handwriting conversion programs due to its sophisticated dictionaries. MetaMoJi engineers designed mazec2 to go well beyond standard dictionaries by adding a vast database of proper names, common social vernacular, and popular phraseology. Users can change their handwriting to digital text in any application on their device without having to use the keyboard. When used in conjunction with MetaMoJi’s applications Note Anytime or 7notes, mazec2 will also permit users to convert their handwriting as a batch later.

Users are raving about how complete and accurate predictive text is within mazec2. One user posted to the Google Play store saying, “Just what I've been waiting for so long. This is my first Comment in Google Play and I wrote it with this app and Galaxy S 3. This app is a key decision for my future gadget to be new Nexus 7 over Note 8.0. So glad that the handwriting Works so well.. THANKS!!”

CONVERT MODE – The Convert mode is the most versatile feature of the app. Most people do not have two hands free with a mobile device because they are usually holding the device in one hand. In Convert mode, mazec2 acts as an alternative input method to keyboard entry in any application on the device. This means that users can handwrite and quickly select suggested words and phrases in digital text on the fly. With an extremely sophisticated vocabulary, this form of input is lightning fast.

STROKE MODE – The Stroke mode is very popular with users of MetaMoJi’s other award-winning apps, Note Anytime and 7 Notes, because users can handwrite entire documents and convert to digital text as a batch later. Since Note Anytime is free for download on nearly all mobile OS, this option provides extremely easy and fast note taking. Anyone, of any age, can handwrite all of their ideas in Note Anytime without worrying about formatting. When they have time later, they can convert the entire document to digital text and change colors, fonts, styles as well as add graphics and any other option they require.

KEYBOARD MODE – The Keyboard mode allows users to toggle between handwriting and keyboard entry as they wish. This mode also allows users to insert words that have not been registered in the mazec2’s dictionaries (such as e-mail addresses or URLs) for infinite re-use later.

With the mazec technology, mobile users can take notes faster and easier in a wide variety of situations, such as during a phone call, attending lectures, meeting with customers, and while commuting. The mazec2 handwriting recognition features can be used within other Android applications such as e-mail, Twitter, blogging apps, and virtually any other application.

Note Anytime is free for download on nearly all mobile devices. Note Anytime is already the #1 app overall in Japan and in the top ten in more than a dozen countries. Get Note Anytime for free from Google Play:
https://play.google.com/store/apps/details?id=com.metamoji.noteanytime&hl=en

7 Notes for Android was awarded the R25 Grand Prix award for “Best Business Android Application” in the recent R25 awards. According to the R25 judges, the app won the award due to its outstanding usability and effectiveness as a note taking tool.

For more information about Note Anytime and 7notes, please visit the MetaMoJi website at http://metamoji.com/en/ .

MetaMoJi creates products to break barriers between devices and users with revolutionary applications on smartphones and tablet devices. MetaMoJi’s unique innovations give users the comfort of an analog experience with the convenience of digital technology. MetaMoJi’s mission is to contribute to the advancement of human beings with unique applications to collect knowledge, write documents, organize ideas and share them with others.

Use mazec2 to jot a tweet and send it out

mazec2 can be used in any app for handwriting recognition

mazec2 is a Superior Predictive Engine for Common Words