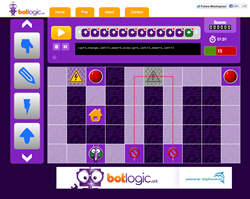 It's becoming more and more important for kids to learn to code...

The goal is simple: guide a robot through a grid-based course using a series of commands. Initially, commands are limited to navigation. As courses become more complex and players improve their skills, they’re asked to incorporate new commands—like pushing a button or stringing a wire between generators—and to combine previously acquired skills in order to accomplish new objectives. Points are awarded for completing each level in the shortest possible time, using the fewest number of moves.

BotLogic.us earned funding after winning a contest for the best app concept earlier this year. Inspired in part by Code.org, a non-profit foundation dedicated to computer programming education, BotLogic.us is the brainchild of Creative Director Brad Wedell.

“It’s becoming more and more important for kids to learn to code,” says Wedell. “I discovered Code.org and Codeschool.com—sites that make learning to code fun and interactive—and the concept for BotLogic.us was born.”

Throughout the development process, the BotLogic.us team has relied upon families for testing and creative input. Initial focus groups included gifted kids’ communities and kids with Asperger’s syndrome (two groups that showed particular interest in the game concept), and tests have involved players ranging in age from 6 to 60. Beta testers responded positively to the game’s minimalist design and kid-friendly soundtrack, and players of all ages found the game fun and challenging.

“We’ve learned a lot, especially from the kids,” says Wedell, “In the end, I’m really proud of what we’ve built, and I think people are going to love it.”

BotLogic.us is designed primarily for players aged 6 and up, but younger children will also enjoy playing with a parent’s help. BotLogic.us runs in any web browser and is free to play. More information is available at http://botlogic.us.