Baby Bust is Over; Births Rising Again; Religious Women Most Likely to Have Children According to the Latest U.S. Fertility Forecast from Demographic Intelligence

The end of the post-recession fertility decline is at hand, according to the August edition of the U.S. Fertility Forecast from Demographic Intelligence. Driven by modest improvements in the economic climate, the Total Fertility Rate (TFR) in the U.S. is predicted to rise from its 25-year low of 1.89 children per woman in 2012 to 1.90 in 2013 (it was 2.12 per children per woman in 2007). 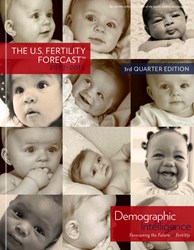 Thank you for providing these reports. It is one of the key data inputs for our company to predict the future trends. - 8/1/13 Analyst for Fortune 50 company

“The United States has seen marked declines in childbearing in the wake of the Great Recession,” said Sam Sturgeon, Ph.D., president of Demographic Intelligence. “But we think that this fertility decline is now over. As the economy rebounds and women have the children they postponed immediately after the Great Recession, we are seeing an
uptick in U.S fertility.”

Drawing on an extensive analysis of demographic, economic, and cultural trends, the new report from DI provides detailed projections of U.S. birth trends in 2013, 2014, and 2015. This edition of The U.S. Fertility ForecastTM also focuses on the links between religion and childbearing for the first time. Among its findings:

Dr. Sturgeon said, “Partly because religious communities provide a family-friendly context to the women who attend them, religious women are more likely to have children, and to bear a comparatively high share of the nation’s children, compared to their less religious or secular peers.”

The U.S. Fertility ForecastTM is typically more than 98 percent accurate in predicting U.S. birth trends. The forecast model proved 99.92 percent accurate in predicting total 2011 births. “This report fills a critical gap for executives and analysts working in the health care and juvenile products industries,” noted Dr. Sturgeon. “DI’s projections are particularly important because the economic and cultural drivers of fertility are changing so much today. Thus, Demographic Intelligence gives companies a clear sense of the demographic road ahead.”