Rules are meant to be broken, genres meant to be blended. The Wheeler Boys present The Common Ground Experiment. 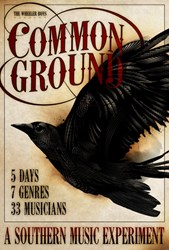 "This project was an eye opener," Garrett Wheeler explains. "We’ve never taken on a project of this scale and seeing everyone come together as strangers and leave as musical peers was great..”

What happens when you mix 33 Southern musicians of all genres, ages, races and backgrounds inside a world-class recording studio in Atlanta for 5 days? You get a glimpse into the future of musical appreciation and hybrid innovations of sounds to come.

The video takes you inside the creative process behind what used to be considered mismatched musical collaborations. The film lets the viewer sample the different colors of the Southern music scene, offering a behind the scenes montage of each days recording.

The Common Ground EP effortlessly blends organic mash ups of hip-hop, country, blues and funk. Each day of recording was a revolving door of musicians, singers, artists, rappers and producers. The only criteria were to meet the strict deadline of one brand new song per day. Many of the artists had never even met or heard each other’s work before collaborating.

Both the short film and EP showcase how the musicians found creative inspiration together as one using the common ground of music. None of the songs fit comfortably into one genre yet fans of any heard on the project will enjoy the songs.

The video accompaniment to the Common Ground EP was directed and edited by Chris Bone (Scarred but Smarter: The Life and Times of Drivin' n' Cryin') and recorded over 5 days at the Crows Nest, a private studio on the outskirts of Atlanta built specifically for Southern Ground artists.

Both the documentary and EP are available starting Friday August 9th 2013 for free download at http://commongroundga.com. The website also features a full list of bands and musicians involved during the 5 day Common Ground project.

When hearing the EP for the first time, the listener gains a new appreciation for just how wide the range of musical appreciation each artist has that contributes. The EP doesn’t sound like a Hip Hop, Country or genre specific at all, its simply good music.

Highlights include the progressive funk/hip-hop cut, "Hideaway," by Atlanta funk band Heavy Chevy and Grammy nominated rap duo AN-TI. Another standout moment is the song "The Lion" by The Wheeler Boys, Nappy's Joint and The Law Band. The song is a 7 minute long spaghetti western infused Hip Hop opera, complete with a whistle solo and Gospel choir montage.

"This project was kind of an eye opener," Garrett Wheeler explains. "We’ve never taken on a project of this scale, with these type of time constraints…”To see everybody come together, not knowing each other in the slightest, then connect and vibe so well, it was a pretty powerful statement about the universal appeal of music."

ABOUT THE WHEELER BOYS

For brothers Sean and Garrett Wheeler, evolving from hip-hop enthusiasts to acclaimed rap duo is an achievement. From their humble beginnings growing up in Atlanta’s Old 4th Ward/Grant Park neighborhoods the brothers quickly raised the ranks of the cities local rap scene. From their first tour ever opening for Ghost Face Killa to being the first Hip Hop group in what seems like forever to be voted by Creative Loafing readers as “Best Hip Hop Group in Atlanta”, a spot for years only hometown hero’s Outkast had claimed.

In 2010, they released their 2nd album, My Brother’s Keeper, which featured production by Wes Green (Mighty High Coup) who helped update and expand their unique sound. In 2011 The Wheeler Boys became the first hip-hop act signed to Southern Ground Artists.

They are currently in the studio finishing their new album for late 2013 release. The EP version of “My Brother’s Keeper,” is available now at http://www.thewheelerboys.com