The next official Time Lord will be announced this Sunday. To stay ahead of the new generation of extra-terrestrial enemies, RIFT urges the new Doctor Who to apply for R&D tax relief. 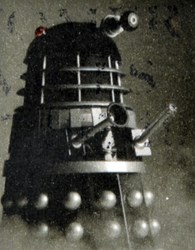 If only the Time Lord had met the HMRC deadlines

The next official Time Lord will be announced this Sunday. RIFT urges the new Doctor Who to apply for R&D tax relief, in order to stay ahead of his enemies.

Doctor Who fans are waiting with bated breath to see who will take the new starring role in the popular television series. The 12th Doctor will be revealed in a special live programme on BBC on Sunday, which will feature an interview with the next Doctor Who, as well as Matt Smith the outgoing incumbent.

The announcement has sparked internet, blogosphere and twitter speculation as to who might take over - Peter Capaldi, Rory Kinnear, Andy Murray or Theresa May? Anything is possible.

While the next Doctor is of obvious interest, it is the inventions at his disposal which have far more significance. The Director at RIFT Research and Development, Sue Nelson, explains:

“Television’s favourite Time Lord could not survive without his sonic screwdriver or Tardis. They are priceless inventions essential for defeating Cybermen or Daleks and staying ahead of extra-terrestrial enemies. Someone, maybe the Doctor himself, has spent much time developing and refining these inventions. He should be applying for R&D tax relief and investing this cash refund to come up with even better innovations.”

The gravitron is just one illustration of a development that would be eligible for R&D tax relief. It is new to the time travel sector, has been developed by experts and there were many technical uncertainties and prototypes before it could be used commercially. The device was installed on the moon in 2050 to control the Earth’s weather.

According to Sue Nelson: "The gavitron is a good example, but any number of Doctor innovations would have been eligible too, if only the Time Lord had met the HMRC deadlines. Our analysis shows that Zeus plugs, the wormhole refractor and the transition of matter through interstitial time (TOMTIT) machine, would also have qualified."

Doctor Who marks its 50th anniversary on 23 November with a special episode featuring the Daleks and the Zygons. It is hoped the Doctor has invested enough R&D time to defeat his adversaries.

About RIFT
Even though the Doctor does not appear to have claimed, RIFT Research and Development recommends that companies currently undertaking any product or service development, should contact a tax specialist to receive the full benefit from the R&D tax relief scheme. Founded in 1999, The RIFT Group is one of the UK’s leading tax refund specialists and has claimed back over £16 million in tax refunds for their clients this year. To find out more about the R&D tax relief scheme, contact 01233 653002 or email info(at)riftresearch(dot)com for a free telephone consultation.