American Universities: Unsung Heroes in the Economic Recovery, According to New Report by AUTM

The results of a new report by the Association of University Technology Managers clearly demonstrate that university technology transfer professionals made significant contributions to the U.S. economy throughout the recession. 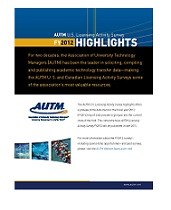 When people think about job creation, they don't typically think about universities, but the data show that universities substantially contribute to the creation of new jobs in this country.

University licensing and startup activity continued to see a robust increase during fiscal year 2012 according to survey data published Aug. 5 by the Association of University Technology Managers (AUTM), a nonprofit association of academic technology transfer professionals.

AUTM announces the release of highlights from the AUTM U.S. Licensing Activity Survey: FY2012, a report scheduled for full release at the end of the year. The survey shares quantitative information about licensing activities at U.S. universities, hospitals and research institutions. The survey report is used by universities, hospitals and research institutions as a means to benchmark licensing activity.

Institutions responding to the survey reported $36.8 billion in net product sales from licensed technologies in fiscal year 2012. In addition, startup companies formed by 70 institutions employed 15,741 full-time employees. This was the second year in which AUTM asked questions specifically targeted at ascertaining the economic impact of academic technology transfer.

"When people think about job creation, they don't typically think about universities, but the data show that universities substantially contribute to the creation of new jobs in this country," adds Flanigan.

Highlights of the AUTM U.S. Licensing Activity Survey: FY2012 include:

Members of the press may contact Jodi Talley at +1-847-559-0846 or jtalley(at)autm(dot)net at AUTM headquarters to set up an interview or to obtain a copy of the highlights report.

The Association of University Technology Managers is a nonprofit organization with an international membership of more than 3,000 technology managers and business executives. AUTM members — managers of intellectual property, one of the most active growth sectors of the global economy —come from more than 300 universities, research institutions and teaching hospitals as well as numerous businesses and government organizations.
# # #