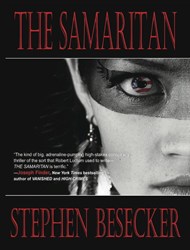 The “big, adrenaline-pumping high-stakes conspiracy thriller,” The Samaritan is going to Hollywood.

This twisting thriller follows a highly skilled CIA tracker, Kevin Easter, whose life is shattered when his wife is killed in a botched mafia hit. A deadly chain reaction of payback threatens a war among New York’s underworld.

Described by Joseph Finder, New York Times bestselling author, as a “big, adrenaline-pumping high-stakes conspiracy thriller,” The Samaritan is an intelligent, character-driven, action story that will keep you guessing until the end.

Mace Neufeld, the producer behind the Tom Clancy films The Hunt for Red October, The Sum of All Fears, Patriot Games, and Jack Ryan has signed on to produce the film brought to him by his executive Robyn Shwer.

The Samaritan is available at Amazon, Barnes & Noble, and bookstores everywhere.

Baltimore-based Bancroft Press has been a leading independent, general-interest publisher for the past 20 years.