The mental health watchdog, Citizens Commission on Human Rights, has taken its commitment to inform and protect the public on mental health issues to a new level with the recent launch of its redesigned website (http://www.cchrint.org) and enhanced psychiatric drug side effects database. 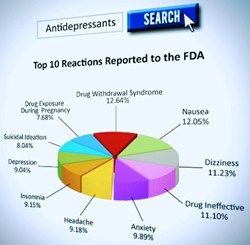 According to the FDA's MedWatch system, between 2004 and 2012, there were more than four hundred thousand adverse reactions from psychiatric drugs reported to the federal drug agency, including drug induced attempted and completed suicides and homicides.

With one in five Americans currently taking prescribed psychiatric drugs (according to Medco Health Solutions), the mental health watchdog, Citizens Commission on Human Rights (CCHR), is concerned the public are not being accurately informed of the documented risks. Taking its commitment to inform and protect the public on mental health issues to a new level, CCHR has launched a comprehensive redesign of its website (http://www.cchrint.org) and enhanced drug database which features 211 psychiatric drug regulatory agency warnings, 223 studies, and over 400,000 adverse reactions reported to the US FDA by doctors, pharmacists, health care providers and consumers.

Wholly aware that trying to sift through the massive amount of data available on the web can be daunting to even the most seasoned researcher, CCHR painstakingly created the definitive guide to documented psychiatric drug side effects, taking the official FDA adverse reaction reports (MedWatch data), international drug regulatory agency warnings and studies, then summarized the often complex information into an easy, user-friendly format for consumers, researchers and policy makers.

For example, the FDA itself does not provide a way for the public to easily utilize the adverse reaction reports contained on their website, and while the data is available for downloading, it requires a programmer to decrypt the complex coding system, comprised of seven text files—over 94,000 pages per year (see side bar image for example of text files.) More than 2,000 hours were spent compiling the data into a user friendly format, which is now available for the general public. Now anyone can easily search side effects reported to the FDA (by doctors, pharmacists, health care providers and consumers) as well as international drug regulatory agency warnings and studies issued on antidepressants, antipsychotics and psycho-stimulants to name a few.

According to the FDA's MedWatch data, between 2004 and 2012, there were more than four hundred thousand adverse reactions from psychiatric drugs reported to the federal drug agency, including drug induced attempted and completed suicides and homicides. While the FDA itself estimates that less than 1% of all serious adverse events are reported directly to it, CCHR states the importance of the Medwatch data is that it represents some of the only post-market surveillance data on psychiatric drugs available. The fact is, the FDA approves psychiatric drugs for public consumption based on short term clinical drug trials (frequently only 6-8 weeks) and does not require drug makers to study the drug’s long term effects once they are out in the consumer market and out of the controlled protocols of drug makers.

In addition to the interactive drug database, CCHR also created web pages summarizing all documented risks of the main classes of psychiatric drugs, such as the following:

Anti-anxiety drug risks - 17 drug regulatory warnings, 18 studies, and 35,230 adverse reactions reported to the FDA. These include:

Too often, important scientific studies are lost on the public due to the confusing and complex nature of such reporting. In an effort to make this information available on a more basic level, the interactive psychiatric drug database allows users to customize their searches by class of drug, brand name of drug, age range and/or a particular side effect. The drug database was created by CCHR as a free public service.

Example of the code from the FDA's adverse reaction reports, which comprises over 94,000 pages of text per year.