A group of Crazy 88 competitors from Baltimore brought home gold medals from both the childrens and adults divisions at NAGA's grappling competition. 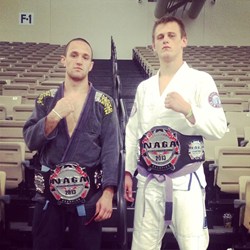 On Saturday, August 3, Crazy 88 Brazilian Jiu-Jitsu had a small team compete at NAGA Battle at the Beach in Wildwood, NJ.

Brazilian Jiu-Jitsu is a grappling martial art made famous by the Gracie family. It is a realistic martial art that is similar to wrestling and uses submissions. The sport is recognized around the world with tournaments often being hosted at the international level.

Promotions such as the North American Grappling Association (NAGA) host tournaments at a local and regional level. This scale of tournament provides a solid starting platform for first time competitors as well as provide additional competition opportunities for veteran members of the team during the season.