Best Western Premier hotels located in 40 countries worldwide. In the next 18 months, the PREMIER brand will grow by 25 percent—to 187 PREMIERs—based on projects in the global pipeline. 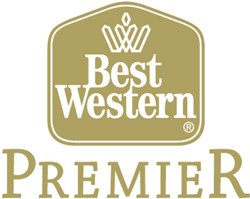 We knew that by introducing the BEST WESTERN PLUS® and PREMIER branded hotels in North America and the PLUS descriptor hotels internationally, that all Best Western hotels would benefit, stated Best Western President and CEO David Kong.

Best Western International launched its BEST WESTERN PREMIER® branded hotel designation in Europe and Asia ten years ago, but only introduced the PREMIER designation to North America in 2011. With more than 150 PREMIERs worldwide in gateway cities like Barcelona, Beijing, Brussels, Istanbul, London, Melbourne, Nairobi, Paris, Seoul, Stockholm and Zurich, Best Western has grown the PREMIER brand in North America to 25 properties in less than two years, most recently adding New York City and Port-au-Prince, Haiti to the list. In the next 18 months, the PREMIER brand will grow by 25 percent—to 187 PREMIERs—based on projects in the global pipeline.

“We knew that by introducing the BEST WESTERN PLUS® and PREMIER branded hotels in North America and the PLUS descriptor hotels internationally, that all Best Western hotels would benefit,” stated Best Western President and CEO David Kong. “Our data and consumer feedback is proof that consumers appreciate the upscale experience and recognize the value BEST WESTERN PREMIER hotels deliver. PREMIERs are hitting the mark with millennials, business and international travelers. Our PLUS and PREMIER branded hotels enable the Best Western brand to grow in North American gateway cities where consumers book different hotel types depending on their travel needs.”

Currently there are nine PREMIER hotels in the North American pipeline with five hotels under construction in New Jersey, Tennessee, Texas, the Dominican Republic and Saipan, a U.S. unincorporated territory. Internationally, there are 28 PREMIER hotels in the pipeline including projects in Africa, Bangladesh, China, England, France, Indonesia, Iraq, Mexico, Myanmar, Netherlands, Russia and Saudi Arabia.

Despite the relatively short time BEST WESTERN PREMIERs have been operating in North America, consumer feedback has been tremendously positive towards the brands North American PREMIERs and supports Best Western’s aggressive promotion of its PREMIER branded hotels:

One of the strengths of the Best Western brand is the diversity of its portfolio. PREMIER branded hotels present hoteliers with the option of developing an upscale branded hotel that can be tailored to meet the needs of a specific market. The BEST WESTERN PREMIER Eden Resort and Suites in Lancaster, Pennsylvania is an example of a PREMIER that has been developed with the needs of the market in mind; paying off with a RevPAR that runs 16 percent higher than the industry upscale segment RevPAR average.

Peter Chiccarine, the owner of the BEST WESTERN PREMIER Eden Resort and Suites believes that the key to the success of his hotel is to continually offer amenities and services that differentiate his hotel from the competition. By reinvesting in his property, offering the best service at the best value and always looking for ways to improve the guest experience, he has achieved a superior return on his invest and RevPAR dominance. “The BEST WESTERN PREMIER brand gives you the power of an international brand that respects the individuality of each owner and operator. With Best Western, I have the ability to add amenities and special services for my guests that I wouldn’t necessarily be able to do if I was with another brand,” he said.

To further distinguish the BEST WESTERN PREMIER from its upscale competitive set, the brand is launching a new extended-stay prototype designed for PLUS or PREMIER branded hotels. This provides developers with the unique opportunity to develop a BEST WESTERN PREMIER branded extended-stay hotel in a market where upscale amenities would be in demand. The flexibility of the prototype design allows for the optimal room mix of suites and oversized rooms depending on the needs of the market.

Best Western’s highly competitive fee structure is one more reason for the rapid growth of the PREMIER product. By charging a flat fee based on the number of rooms, PREMIER owners pay five-to-nine percent less in annual fees, which means a better return on their investment.

ABOUT BEST WESTERN INTERNATIONAL, INC.
Best Western International, Inc., headquartered in Phoenix, Ariz., is a privately held hotel brand made up of more than 4,000* BEST WESTERN®, BEST WESTERN PLUS® and BEST WESTERN PREMIER® hotels in more than 100* countries and territories worldwide. Now celebrating 67 years of hospitality, Best Western welcomes hundreds of thousands of guests nightly. Best Western provides its hoteliers with global operational, sales, marketing and promotional support, and online and mobile booking capabilities. More than 20 million travelers are members of the brand’s award-winning loyalty program Best Western Rewards®, one of the few programs in which members earn points that never expire and can be redeemed at any Best Western hotel worldwide. The brand’s partnerships with AAA/CAA, race car driver Michael Waltrip, and Harley-Davidson® provide travelers with exciting ways to interact with the brand. In 2012, Best Western won a record number of awards, including AAA’s Hotel Partner of the Year, CAA’s Partner of the Year, TravelClick’s eMarketer of the Year and Compuware’s Best of the Web Gold awards.

For more information or to make a reservation, please visit bestwestern.com.

*Numbers are approximate and can fluctuate.
** Source Medallia