Parag Khanna to Give Keynote Address at GEOINT 2013

Global Strategist and Best-Selling Author to Speak at Annual Symposium 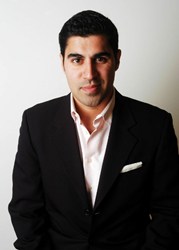 Renowned futurist and geo-strategist Dr. Parag Khanna is a senior fellow at the New America Foundation and an avid traveler on a mission to share his knowledge on evolving global and technological trends.

As part of the GEOINT 2013 Symposium, October 13-16 at the Tampa Convention Center in Tampa, FL, Dr. Khanna will share his views Oct. 16 on the future of global political and technological geography.

“I'm very excited about GEOINT 2013 as it's the premier event for thinking strategically about geography,” said Dr. Khanna. “I will be talking about how the world is being re-mapped by the forces of globalization, about which kinds of powerful forces we don't see on maps but need to recognize, and how strategists need to leverage these forces to gather intelligence and plan for operations. I hope it is useful for all members of the GEOINT Community who closely observe global trends and anticipate American operations abroad.”

Dr. Khanna and his wife, Ayesha Khanna, recently co-authored Hybrid Reality: Thriving in the Emerging Human-Technology Civilization, which examines shifting political geography related to natural resource development, population size, manufacturing and robotics. Additionally, he is the author of How to Run the World: Charting a Course to the Next Renaissance and The Second World: Empires and Influence in the New Global Order. Dr. Khanna has also contributed to The Wall Street Journal, The Washington Post, BusinessWeek and Forbes.

In addition to his work at the New America Foundation, Dr. Khanna is also director of the Hybrid Reality Institute, an adjunct professor with the Lee Kuan Yew School of Public Policy at the National University of Singapore, and a senior fellow at the European Council on Foreign Relations and the Singapore Institute of International Affairs. Dr. Khanna was part of Barack Obama’s foreign policy advisory group during the 2007 presidential campaign, and he has also served in Iraq and Afghanistan as a senior geo-political advisor to Special Operations Forces.

For more information about the GEOINT Symposium, please visit http://www.GEOINT2013.com/.

About USGIF
USGIF is a non-profit educational foundation dedicated to promoting the geospatial intelligence tradecraft and developing a stronger GEOINT Community with government, industry, academia, professional organizations and individuals whose mission is the development and application of geospatial intelligence to address national security challenges. For more information, please visit http://www.USGIF.org/.