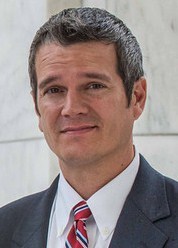 His years of experience in international affairs and dedication to powerful grassroots advocacy will help take UNA-USA to even higher levels of engagement and effectiveness in the years to come.

The United Nations Association of the USA (UNA-USA), a program of the United Nations Foundation, today announced that Chris Whatley will join the organization as Executive Director. In this role, he will lead UNA-USA's nationwide membership, educational, and human rights programs, at the heart of the movement of Americans who support the important work of the United Nations.

"Chris is joining us at a pivotal time in the history of UNA-USA and the UN Foundation, when the opportunities to actively support the UN are greater than ever," said UN Foundation President & CEO Kathy Calvin. "His years of experience in international affairs and dedication to powerful grassroots advocacy will help take UNA-USA to even higher levels of engagement and effectiveness in the years to come."

Whatley will lead UNA-USA’s national staff in Washington, D.C. and New York, and will head up the Association’s efforts to increase membership, advocate on behalf of the UN and UN causes, and educate the next generation of UN supporters in the U.S. through UNA-USA’s Global Classrooms Model UN program. He will also be responsible for the close coordination of UNA-USA with other programs, initiatives and activities of the United Nations Foundation and its sister organization, the Better World Campaign.

"As someone who has experienced the critical importance of UN peacekeeping and the work of the specialized agencies firsthand, I look forward to working with UNA-USA members and staff to continue the Association’s strong legacy and further build the UNA-USA network to help ensure a positive U.S.-UN relationship for the future," said Whatley.

Before joining UNA-USA, Whatley served as Deputy Executive Director and Washington Office Director of The Council of State Governments where he served as a voice for U.S. states in Washington, D.C. and oversaw the Council’s federal advocacy and international outreach. He began his career as a field-based program officer for the International Republican Institute running democracy assistance projects in Liberia, Nigeria, South Africa, and Zimbabwe. Whatley holds a B.A. in Government from Angelo State University and an M.S. in Foreign Service from Georgetown University.

ABOUT THE UNITED NATIONS FOUNDATION
The United Nations Foundation builds public-private partnerships to address the world’s most pressing problems, and broadens support for the United Nations through advocacy and public outreach. Through innovative campaigns and initiatives, the Foundation connects people, ideas, and resources to help the UN solve global problems. The Foundation was created in 1998 as a U.S. public charity by entrepreneur and philanthropist Ted Turner and now is supported by global corporations, foundations, governments, and individuals. For more information, visit http://www.unfoundation.org.