NASA’s dramatic video of a black-topped sun on the verge of flipping its magnetic polarity has captivated people. Friends of Science say the current low solar sunspot activity, not seen in 200 years, is a pattern that historically preceded global cooling and that the sun is the main driver of climate change, not carbon dioxide. 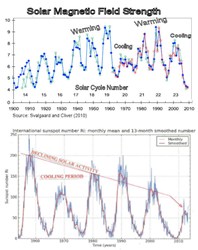 The current sun spot behavior has not been observed in 200 years.

Climate change on earth is significantly affected by the changing 11 year solar magnetic cycles, according to Friends of Science and many solar and climate researchers. A recently released NASA video, complete with animation explaining the process wherein the sun’s magnetic poles flip polarity, lends credence to the scientific position Friends of Science takes on climate change and global warming.

“We are pleased that the NASA video and animation describing these events in part explains how climate is affected by the solar magnetic flux,” says Dr. Neil Hutton, director of Friends of Science.

The video also notes there are space and earth climate variations as earth passes through the ‘waves’ of magnetic energy radiating from the sun.

Dr. Hutton is a long-time proponent of the view that solar magnetic flux is the principle driver of climate change. His work has been cited by the late Dr. Peter Ziegler, Emeritus Professor, University of Basel, in December 2010 in a presentation to the Swiss Academy of Sciences.

“For the first time in history, people are able to observe close-up the changes the sun goes through as its magnetic poles flip,” says Hutton. He points out that sun spot activity has been documented as early as 300 BC, but most notably by Galileo in the 1600’s, and the activity has been systematically recorded since 1700.

Hutton notes that this particular “Cycle 24” of the sun is quite unusual due to the very low number of sunspots.

“The current sun spot behavior has not been observed in 200 years,” says Hutton.

Colder periods like the Little Ice Age were preceded by low sunspot activity. During the Little Ice Age from about 1350 to 1850, cooler temperatures and wet seasons across Europe lead to massive crop failures, famines and civil unrest.

Hutton states: “The Sun's magnetic index is measured daily and has significantly declined since the last maximum of Cycle 23. The geomagnetic activity of earth and that of the sun are interrelated and their interplay also affects climate. Theoretically, a weaker solar magnetic field could allow the penetration of more cosmic rays which directly affect cloud cover and climate. This has been demonstrated by the recently completed CLOUD experiment at CERN, the European Organization for Nuclear Research.”

Friends of Science express concern that global governments are not prepared for the possible consequences of multi-decade global cooling.

“Even a one degree drop in temperature could devastate agricultural production,” says Hutton. “Are we prepared?”

“Instead of spending a trillion dollars world-wide on carbon reduction policies and unreliable wind and solar, as we have done in the past decade, we need to upgrade and maintain inexpensive fossil-fuel based energy for northern, industrialized countries,” says Hutton.

Friends of Science President, Len Maier, a retired engineer, is a farmer and recommends: “We must convert land production from producing biofuels from crops like canola and corn. Current producing crops like these should be dedicated to human or animal feed, not be used for biofuels.”

The Little Ice Age lasted about 500 years. Other periods of extended cooling occurred before humans used fossil-fuels. Friends of Science agree that human activity has some impact on climate; the effect of human-produced carbon dioxide (CO2) is minor compared to natural forces and cyclical patterns of the sun and ocean currents.

Friends of Science have spent a decade reviewing a broad spectrum of literature on climate change and have concluded the sun is the main driver of climate change, not carbon dioxide (CO2). Membership is open to the public and available on-line.

Consequences of a 1 to 2 degree drop in temperature, whether the result of a nuclear winter or solar minimum.Canadian breadbasket decimated by cooling temperatures