Chef Michael Parise, owner of "Taste This LA, declares war on bland tasteless food that most Los Angeles and Ventura catering companies are still serving up. 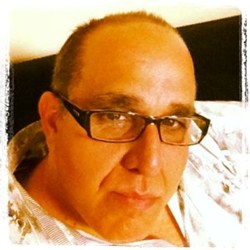 "Los Angeles is the land of the misfit toys"

Its always the same old thing, you call a catering company to make your event a special one with the best food money can buy, they do a tasting and everything goes great until the day of your event, what a disappointment! The chicken is like rubber, the salmon is dry and tasteless and the rice pilaf is predictably boxed but it is to late to turn back time, you just grin and bare it and even though in a handsome gratuity at the end.

Chef/Comedain Michael Parise, aka 'Wheels' to his show business friends decided he is calling the the drip drab catering companies in Los Angeles who charge a small fortune for junk-food... on their crap and launch, Taste This LA Catering, a Los Angeles catering company geared to the foodies of LA. Taste This LA is a new company with a fantastic reputation already because Chef Parise was the founder and owner of Los Angeles's number one catering company called, "Cannoli Kings". Cannoli Kings was the most cutting edge catering company in Los Angeles, always staying on top of the food world, winning best catering Los Angeles by FOXLA and Citysearch. Featured in reality shows on VH-1, Fox and tons of periodicals, Chef Parise is no stranger to Los Angeles and he knows exactly what the City of Angeles needs...Delicious food, Cutting edge techniques, affordability and attentive flawless service. "Los Angeles is the land of the misfit toys" says Parise. "Everyone is from someplace else and miss what they grew up with no matter what country or American city they are from, they miss home and I am here to bring home back to them through Taste This LA."

Chef Parise grew up in a Italian American New York Family with food always being the focus of the day or night. Food is in his blood. Coming from a long line of Chefs including his Grandma Annie Parise, His Uncle Goldie Occhiuzzo and his Brother Victor Parise who to this day, comes in from NY to Los Angeles to be a part of the big events cooking side by side with his brother Michael.

Moving to Los Angeles in 1990 to pursue his comedy career as "Michael Wheels Parise" where to this day he is a national headlining comedian throughout the country as well as Las Vegas, with one of the top podcasts out with longtime friend, Andrew Dice Clay called "Rollin with Dice and Wheels" Michael worked in some of the top culinary establishments, even being inducted in to the :Great Chefs Of Los Angeles" in 2003.

Taste This LA, Catering focuses on originality and authenticity in all aspects of food with of course the signature Parise twist. From ethnic street foods to American regional Barbecue Catering to Regional Comfort Foods, Taste This LA has got you covered. Wedding Catering and Event Catering in Los Angeles is even easier now to have what you and your guests are craving.

Taste This LA is a full service catering and Event Company based in Los Angeles and Serving Los Angeles Counties and Ventura Counties. From the moment they answer the phone, your special event is handled, from service, event planning, wedding planning, rentals to entertainment... Lights, camera, action! Taste This LA is your one stop shop.