Raymond J. Learsy, Commodities Expert, Explains Why Gas Prices Are So High in His New Book, Ruminations on the Distortion of Oil Prices and Crony Capitalism

The author discusses corruption on the commodities exchanges and how it negatively impacts our economy. 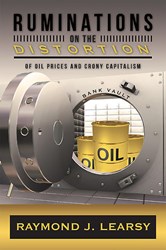 Oil prices are gamed and have little to do with market discipline of supply and demand.

Consumers are being ripped off to the tune of billions of dollars every day. Who is stealing from them? Two words: big oil. Oil interests have a malevolent influence on market pricing, which is hurting the American and world economies.

Raymond J. Learsy’s newest book, Ruminations on the Distortion of Oil Prices and Crony Capitalism, discusses the distortion of oil pricing and focuses on the effects of the crony capitalism that have enriched only a select few and left Main Street in the lurch.

“Oil prices are gamed and have little to do with market discipline of supply and demand,” says Learsy. “This book explains the baleful formation of oil prices and ancillary issues that underlie the corruptness of the system and those complicit in it.”

In Ruminations, Learsy describes how the powers-that-be have subsumed the laws of supply and demand and ceded price formulation to gambling dens on the trading floors of commodity exchanges.

"Consumers are incensed not only by the price of gasoline and how it is promulgated, but also by the crony capitalism practiced by policy makers, regulators and others that make the perversion in oil prices and other commodities possible," says Learsy.

Ruminations focuses on Wall Street’s corrupting influence on the price of oil, gasoline and other commodities. Learsy uses his experience to provide an overview of this basic and important theme: the United States is enslaved to big oil and the moneyed interests tied to it.

Raymond J. Learsy is a graduate of The Wharton School of the University of Pennsylvania. Beginning in 1959, he made his life in the fast-paced, risk-filled world of commodities trading. In 1963, he started his own firm and over 20 years expanded from the U.S. into Canada, the United Kingdom, Europe and Asia, trading in an array of bulk raw materials and commodities, shipping to customers worldwide. In the 1980s, he became a private investor, and from 1982 to 1988, served as a Reagan appointee to the National Endowment for the Arts.

Learsy's analysis of the international oil trade, OPEC and its impact on the American and world economies has been featured in the National Review Online, the New York Times, the Pipeline and Gas Journal, CNBC, and he is a regular contributor to the Huffington Post.