Independent publisher Bitingduck Press is dedicating its 2015 catalog to hard science fiction. The first signed book in this theme is "The Mindtraveler," the eighth novel by science-in-fiction writer Bonnie Rozanski. 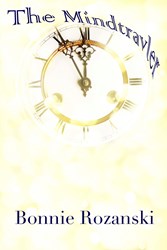 Everyone's fascinated with the concept of time travel.

Margaret Braverman, a 60-year-old physicist teaching at a small college, can’t help but regret the things she never quite got right. Most of all was the tragic ending of her romance with her brilliant colleague Frank, something she’s never gotten over it. Then there is the prospect of restoring the respect of her colleagues after an unfortunate incident where she set her hair on fire. And, of course, it would be glorious to get even with that mean-spirited, conceited, womanizing chairman of her department, Caleb Winter.

Common knowledge has it that we get but one shot at life. But in Bonnie Rozanski’s upcoming novel, “The Mindtraveler,” Margaret gets a second chance. After years of experimentation in the back room of her lab, she has finally built a time machine. The key, she discovered, is in teleporting not the body but the mind. And so, at 5:03 p.m. on May 3, 2012, Margaret teleports her mind to her 1987 self.

The book is filled with details that will bring chuckles to anyone who remembers the eighties. The weather is a pre-Global Warming cool; the young are not glued to their electronic devices; anti-apartheid protests abound…. And for Margaret, it’s a joy to walk again without an ache in her knees or that old hitch in her back. But she has a big problem: a disembodied mind residing in her young self’s body can’t move a muscle. All she can do is to passively witness what she lived once before, and, until she figures out how to influence things, nothing is going to change.

“I think everyone’s fascinated by the prospect of time travel,” says Rozanski. “I’m actually also intrigued by the idea that perhaps, as one physicist contends, the past isn’t fixed at all. Maybe future actions can cause past events as much as the past can cause the future.”

Bonnie has an undergraduate degree in Psychology from the University of Pennsylvania, and Master's degrees in Computer Science and Business. She has worked in academia and business, but some years ago, in an epiphany, she decided to devote the rest of her professional life to her first love, writing. Since then, Bonnie has completed eight novels and six plays, with scientific issues generally informing the plots.

Her first book, "Banana Kiss," was published in the fall of 2005 by Porcupine’s Quill, a small Ontario literary publisher with a stellar reputation. "Banana Kiss" has earned critical acclaim in Canada and the U.S. with reviews in Foreword, Quill & Quire, the Globe and Mail, and the Trenton Times.

"Borderline," Bonnie’s second novel, was published in June of 2007 by Porcupine’s Quill. It was shortlisted as a YA finalist for Foreword Magazine’s Book of the Year Awards and received a silver medal at the 2008 Independent Publisher’s Awards. The author also has five more ebooks for Kindle. One of them, "Six Clicks Away," was a drama winner of the Red Adept 2010 Indie Awards.

“The Mindtraveler” was accepted by Bitingduck Press in 2013 as part of its Spring 2015 “Hard Science Fiction” theme. Founded in March 2012 by two physicists, Bitingduck Press is an independent publisher that brings the quirky, ego-driven, and sometimes corrupt world of science to its readers. Publishing 6-8 titles per year, the press is currently accepting manuscripts for its 2015 Spring and Fall catalogs in a wide range of genres, particularly hard sci-fi and narrative nonfiction.